Given the Ron Rivera debates from the last few days, I decided to take a step back and look at every tough decision he's had to make over the last year or so. This data tells us nothing about him as a head coach other than what he's done on 4th downs in situations where there's more options than just a punt or field goal. I understand people have gripes about Rivera that aren't specifically 4th down related, however, it is not uncommon to see people cite Rivera's 2013 risk taking as a reference point to say that he's changed and is unwilling to take risks on 4th down. For the most part, this is just raw data and is not intended to continue the same arguments that have gone on all week. Instead, I'm more interested in seeing how everyone feels about specific 4th down examples rather than the usual generic complaints of "He's a coward on 4th down now!"

Explanation of the Chart

Rules for determining what qualifies as a "4th down decision" 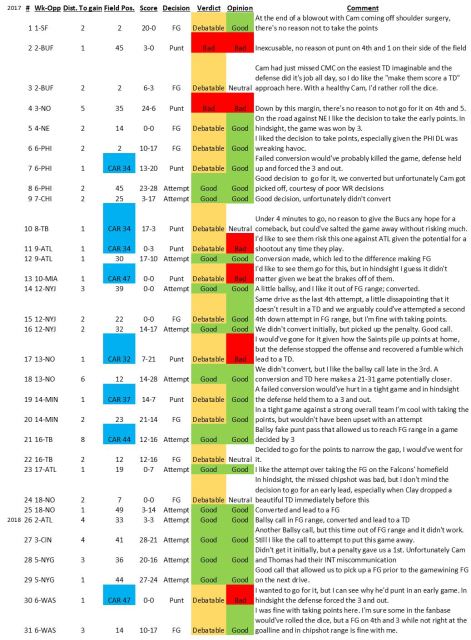 Based on looking at the outcomes and decisions made, I noticed three things:

Obviously my opinion fell in line with a lot of Rivera's decisions, but I'm curious to see how the rest of the fanbase feels about specific 4th down instances. Did the 4th down decisions look like what you expected? Which ones do you disagree with? Are there any 4th downs not mentioned that you feel should've been included?