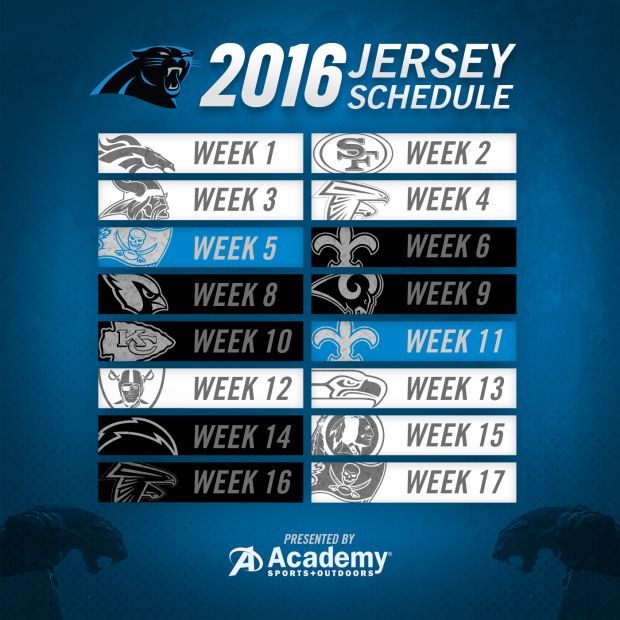 Panthers will don the black uniforms @Baltimore in week 1 of the preseason, I think if they are to wear black pants at all this year it'll be this game. It seems Jerry doesn't mind pulling those out in the preseason, for those of you not counting we have worn them twice in the preseason against the Eagles and Bills. Week 2 of preseason they'll wear the alternate blue @Tennessee, which I did not know was allowed in the preseason. Weeks 3 and 4 vs NE and Pittsburgh we will wear our white uniforms at home, like we always do in preseason.

Weeks 1-4 of the regular season we will see all white, two on the road and two at home to force the Vikings/49ers to rock the darker colors in the Charlotte September heat.

Week 5 we will be wearing our blue uniform on Monday Night Football against the Buccaneers. It'd be cool to surprise everyone and rock the blue pants but I'd suspect this game has classic silver pants.

Weeks 6-10 we will be wearing black (aside from the bye week) with two road games and two home games. Interesting the Saints and Rams choose to wear white since they are the home teams and usually rock black or blue at home.

Week 11 we will be in the all blue look at home on Thursday Night Football for our color rush game for the season. I'm hoping the NFL makes NO wear all gold and not just because it'll look hideous. Anyone remember the blue vs gold dress that broke the Internet not too long ago? 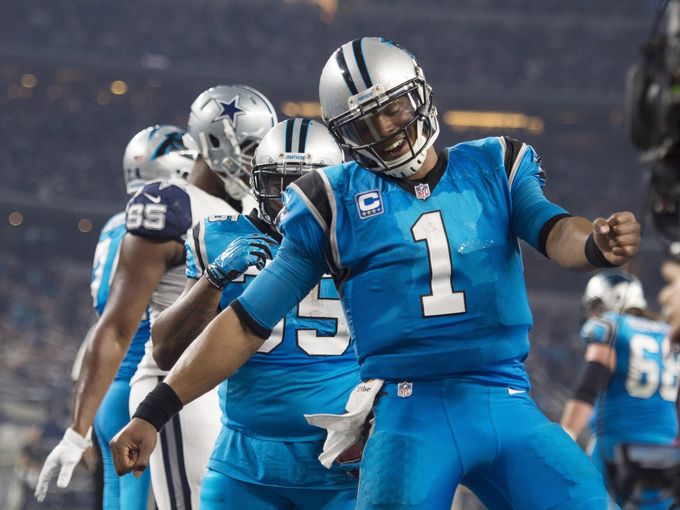 Here is Cam Swag and Smurfin

Weeks 12 and 13 we'll be on the road wearing white @Oakland and on Sunday Night Football against the Shehawks (LETS GO!!!)

Week 14 we'll be back at home wearing our classic black against San Diego.

Week 15 we'll be in my stomping grounds (DC) giving Josh Norman and the Foreskins a visit on Monday night in our classic white uniforms.

Week 16 will be an early Christmas present to us all with our final home game (on Christmas Eve!!) by watching us take on the Falcons in our black uniforms.

Week 17 we will close out the season in our all white uniform in a game that (hopefully) won't matter much unless we are playing to be undefeated or for homefield advantage in Tampa.

Only change from last year is they allowed us to wear blue three times, though looking back it seems like a special privilege since it was a Thanksgiving game and they are now back to the rule of only allowing alternate jerseys to be worn twice during the season. This year shakes out as wearing white eight times (+2 in preseason), black six times (+1 in preseason), and blue two times (+1 in preseason).

What is your favorite Panthers uniform?