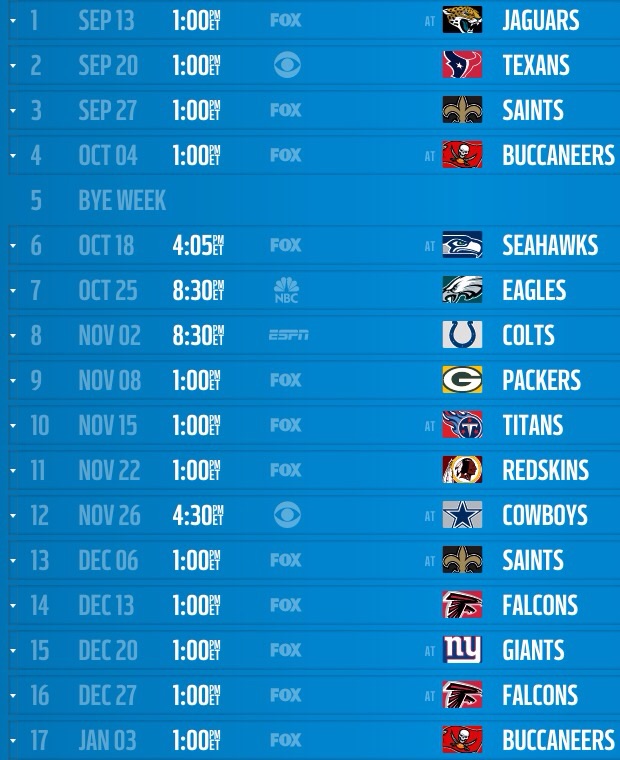 This year will present the Panthers with a chance to 3-peat the NFC South and prove themselves as a legitimate contender in the NFC. As we all know the NFC South was easily the worst division in football with no team having a winning record for the first time since it's inception in 2002. It was still a historic year for the Panthers as they became the very first team in the division to win back to back division titles and only the second team in NFL history to win a playoff game despite having a regular season record of below .500. In that playoff game the Panthers held the Arizona Cardinals to 77 yards on offense the lowest amount ever in a playoff game. While they ended up losing in the very next round to the Seattle Seahawks they had finally gotten that monkey in the shape of a playoff win off their backs.

In what was a year of many ups and downs for the Panthers and their fans they managed to persevere and fight back against all odds in December despite a constantly banged up Cam, O-line, and running back core. Hopefully the Panthers can get back to their 2013 form with many new additions and very few subtractions. 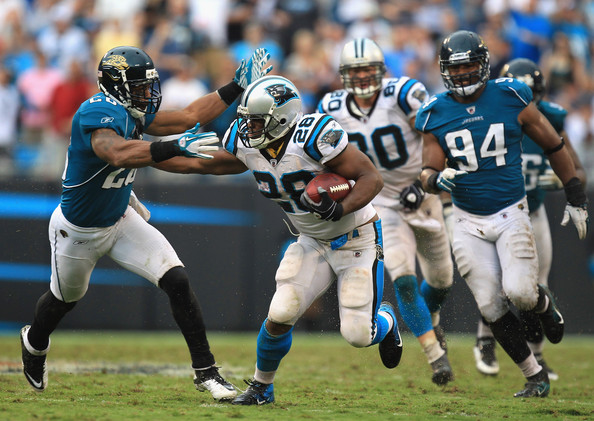 A favorable match-up for the Panthers early on against the Jacksonville Jaguars who finished 3-13 last year and selected Dante Fowler Jr with the 3rd overall pick in the draft . *Note he will not be playing this season as he has torn his ACL in OTA's.

As the season kicks off our secondary will get a test against a very solid Jaguars receiving corps headlined by the signing of tight end Julius Thomas who is coming off a career year in Denver as well as Marqise Lee, Allen Hurns and Allen Robinson. I will also be the start of Blake Bortles second season in the NFL who struggled last year. The drafting of TJ Yeldon should give the Jags a true RB1 for the first time since the explosive Maurice Jones Drew who retired this offseason.

For the Panthers we will see the start of hopefully storied careers of Devin Funchess and Shaq Thompson who were the Panthers first 2 selections in this year's draft. As well as the additions of cornerback Charles Tillman and our 'savior' at LT in Michael Oher who will hope to prove the critics wrong after some recent disappointing seasons in Baltimore and Tennessee which could have been due to a nagging toe injury that is finally healed. He will be reunited with his former O-line coach in Baltimore, John Matsko with whom he had his best season with in his rookie year.

I feel Devin Funchess will have a great game with north of 75 yards and 1 Td because of the double coverage being thrown Kelvin Benjamin's way and also the fact that the Jags are weak in terms of secondary who will be no match for the trio of towers Greg Olsen, Kelvin Benjamin, and Devin Funchess. Not to be outdone by his fellow rookie Yeldon will rush for 60+ and a TD. 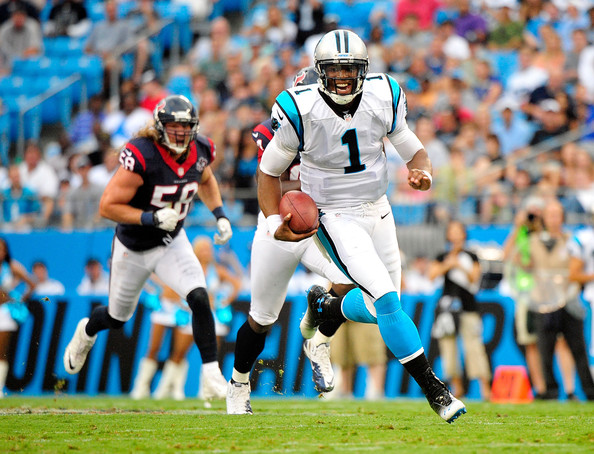 The first home game of the year promises to me a defensive struggle to the end with the likes of JJ Watt and Luke Kuechly headlining high powered front sevens. The Texans have a major question as to who will start at QB with Brian Hoyer and Ryan Mallett both in the running for the starting position.The Texans also failed to answer that question by not drafting any QB's in the draft instead opting to improve their defense with drafting CB Kevin Johnson with the 16th overall pick.

I feel the Texans will have a lot of trouble getting off the ground even with DeAndre Hopkins, Arian Foster and the addition of Cecil Shorts III. Then again this team still went 9-7 with Ryan Fitzpatrick starting at QB so they could be hard to get a read on considering JJ Watt was literally everywhere last year. Our D-line will have fun getting acquainted with whoever is starting with Frank Alexander and Kony Ealy gunning for that starting DE position alongside the usual suspects of Star, KK, and CJ. Our O-line will get one of it's biggest tests of the year against the Texans front seven which could prove too much for our OT's though I feel the inside should be stable enough for any read options should it come to that as well as JStew ripping off a couple good runs.

I feel like the tag team of Luke Kuechly and Thomas Davis will be to stop Foster from getting any big runs. Between the 2 of them they will get 20+ tackles, a forced fumble and a sack to top it all off. JJ Watt will be an absolute monster against our offensive tackles and force much needed pressure on Cam which will disrupt the entire offense. 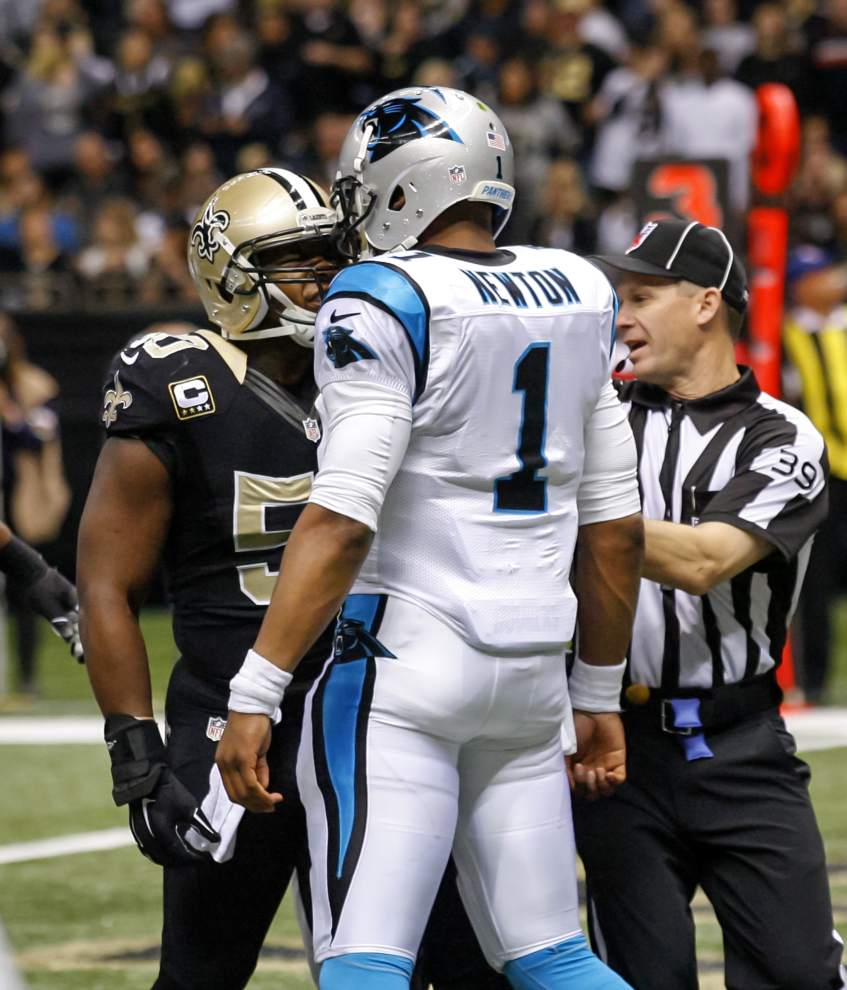 In the first official match against a hated division rival the Saints come to town hoping to get revenge after the pounding Cam and J-Stew handed them last time around in the Superdome. This will be a chance for the Panthers to get the same satisfaction after the Thursday Night beatdown they gave us at BOA. We all know how much Thomas Davis will miss his old friend Jimmy Graham so he will have to find a new chew toy.

The Saints had 2 first round draft picks with Andrus Peat and Stephone Anthony to help shore up much needed positions. The Panthers will have to hope to capitalize on an aging Drew Brees who just lost he main weapon in Graham. The Saints also added Brandon Browner and CJ Spiller to improve the secondary and running game. While the Saints secondary was injured last year the few games they did play as a complete unit in a few games and did not look good at all. I would expect them to look a lot better than that small sample they gave us last year.

The Panthers receiving corps has greatly improved with us finally finding a WR2 in Devin Funchess as well KB and Corey (Philly) Brown entering their second seasons. As a whole we still have a much better defense than the Saints and our offense is catching up to theirs in terms of having better receivers and tight ends while being behind in terms of QB's. Jonathon Stewart is better than CJ Spiller and Mark Ingram when healthy but after him there is a steep dropoff to either Fozzy Whitaker or the rookie Cameron Artis Payne.

Even with all the new additions to the teams in the South, Carolina is still the closest to a complete team. J-Stew will have a big game with over 125 yards on the ground as the Panthers do what they do best: Control the clock. Brees will be able to get down the field but will have trouble just outside the redzone which will stall drives and force field goals attempts. 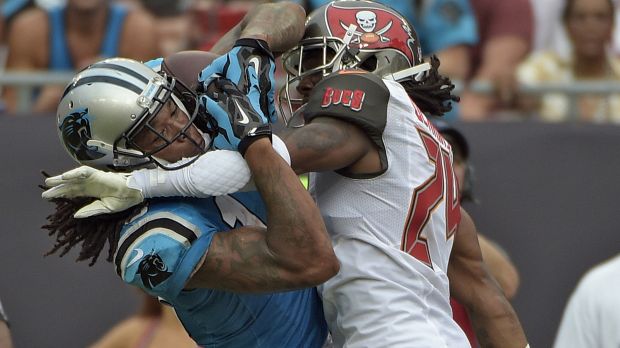 The Panthers will look to continue their hot start as they roll in to Tampa hoping to make it 4 in a row. This year the Bucs will hope to have a legitimate QB in Jameis Winston the first overall pick in the draft who is coming to a team with plenty of receiving weapons. Mike Evans and Vincent Jackson account for the other pair of towers in the South who could wreck house if not contained by our secondary.

This will also be Cam Newton's first matchup against the Buc's since 2013 as he missed the past 2 games with fractured ribs and a back injury stemming from his car accident. Cam will have his work cut for him against the likes of Lavonte David and Gerald Mccoy. Though if the O-line can sustain the pressure from the pass rush the Panthers should have one of their best passing games this year against a weak Bucs secondary.

If Josh Norman and Bene Benewikere can shut down VJax and Evans this game should never be in question no matter how much our offense struggles in the redzone. Kelvin Benjamin will look to continue his hot play against Tampa and will capitalize on the inability to double cover him with Olsen and Funchess on the field. Kony Ealy will prove himself in this game to be the starting DE across from Charles Johnson against a still very weak O-line and rookie QB. My player of the game would be KB with 100 yards receiving and 2 TDs.

Record in the first quarter of season 4-0

While a 4-0 start is very unusual for the Panthers this schedule allows for a strong start out of the gate. The only game that could be in question is the one against the Texans for the fact that they have a strong defense and are only missing a QB on offense. Granted that is a big piece of the puzzle. The 2nd quarter of the season promises to be a real challenge with games against all teams who had at least 10 wins last year. Previous history would indicate that we are in big trouble for 3 of those games as 2 are at night and 1 is coming off the bye week. I am full well aware that this sounds extremely optimistic considering strong starts tend to elude us but, I really feel like this could be the year we prove to be a dangerous threat in the NFC.

This is my first official Fanpost so hopefully it won't be judged to harshly. I plan to make regular articles over the season to see if it's for me and weather I will pursue it down the road. I am also well aware that these predictions are way too early but I figured that it would be nice to pass the time and spark conversation before training camp kicks off at the end of the month.

Do you think the Panthers will start the season 4-0?