The Carolina Panthers are coming off an up-and-down NATIONAL FOOTBALL LEAGUE season that ended with a Cam Newton interception. How typical.

So, this offseason the so-called "Cardiac Cats" find themselves in quite the stressful, heart-pounding perdicament of keeping their star quarterback in Charlotte and let me tell you: Derek Anderson won't come cheap.

Oh, you thought that I was talking about Newton? PUH-leese people, Cam is old news and in two postseason trips (or should I say "visits" considering how short they were) he's a proven shyster.

Now, you're probably thinking "That's being a little harsh to such a young quarterback!" but allow me to let you in on a little secret: Cam Newton cares more about grinning than winning.

Think about it: What does Newton do every time after scoring a touchdown? Instead of handing the ball to the ref and trudging back to the bench with his head down, he decides to show no class. He preens, does his Superman pose and shows off his smile. It's almost as if he's happy about scoring touchdowns. And chew on this: how many times has Cam's smiling lead to postseason wins? Only once! Once in four years! And this is the guy that Gettleman wants to sign to a contract extension?!

Newton's antics get even worse once you realize they extend to off the field as well. The most egregious example of this is how he conducted himself during his car "accident". 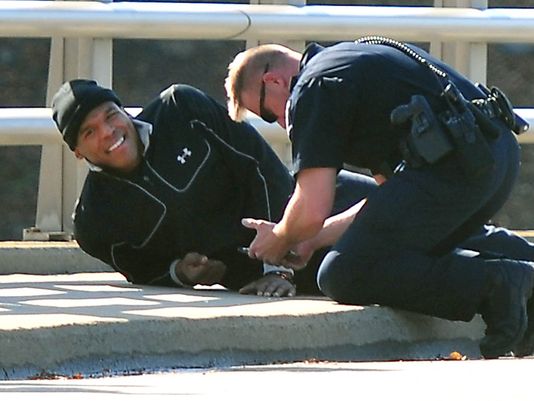 This picture perfectly encapsulates Cam Newton: relaxing on his behind, smiling and showing off for the cameras while the real heroes (in his team's case, the offensive line) do all the work. Why isn't he getting off his hide and helping the police move his overturned car? Similarly why hasn't he transformed Chandler and Bell into Pro Bowl caliber offensive tackles? Makes you think...

By now you're probably thinking, "There's nothing wrong with Cam smiling a lot and being charismatic!" but y'know who else was charismatic and smiled a lot? 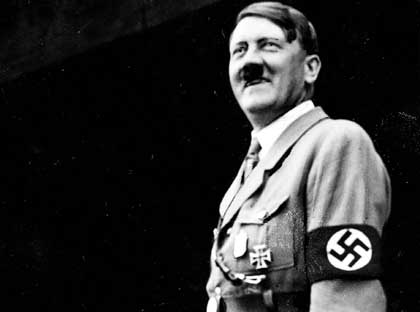 Now, I'm not trying to compare Cam Newton to Adolf Hitler but we should never forget our history otherwise we'll be doomed to repeat it, people.