In the past 10 years, NFL uniform design has really pushed the boundaries, as new materials and styles have fundamentally changed the look of the game, yet the Panthers, with some exceptions, wholly look the same today as they did in 1995. Lets look back over the last 10 years and see how the Panthers classic look has adapted to these new times.

In Part 1 I examined the first 10 years of the Panthers uniform history, patches, one offs and all.  Today we will look at the more recent looks of the franchise. 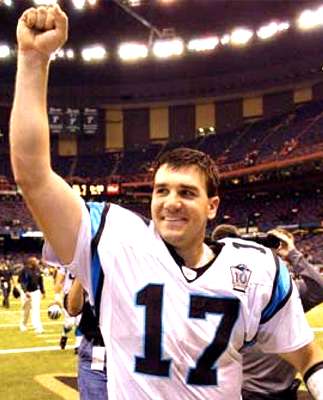 In 2004 the Panthers were on high, coming off a painfully close Super Bowl loss to the New England Patriots the prior season, but with their roster mostly intact, and many pundits had picked Carolina to make back to back runs to the big game.  Instead, the wheels feel off, and with 14 players on IR, including pretty much the entire running back corps this version of the Panthers would limp to 1-7 and finish 7-9, just short of the playoffs.  This was also the year the panthers celebrated their 10 years in the league wearing the above patch.

In addition to the 10 year patch, and the 20 year and Inaugural Season patches which have already been mentioned, the Panthers have worn three other patches (to my knowledge).

- December 9th 2012 and December 14th 2012, the Panthers would win both of these games respectively a home game against the Falcons and, once again, and away game at the Chargers, weaing the league wide 50th Anniversary patch for the Pro Football Hall of Fame.

One of the stranger quirks of the Panther's uniform design over the years has been the evolution of the large shoulder stripes.  Due to the demands of the players for a specific jersey fit, as well as new materials and jersey cuts, the stripes have been reformed to fit new designs.  To best illustrate this, I have assembled three great line backers over three distinct era's in the Panthers history; Sam Mills from the expansion years, Dan Morgan's Rookie year during the short lived Chris Winkie era, and Luke Kuechly of today (well last year to be exact).  As you can see, the stripes were designed to be more like loops going over the shoulder and under the arm pit, very much mimiking the Jerry Richardson's Baltimore Colts, you can still see this element in Cam Newton's jersey style.  Yet as the jerseys got tighter, the stripes got shorter, illustrated by Dan Morgan's narrower stripes that stop at the arm pit rather than go under it.  Today, the vast majority of the Panthers roster wears a cut similar to Luke Kuechly, where the stripes inexplicably curve outward and abruptly end at the edge of the shoulder pads.  This is not new by any means, just look at Kevin Greene, however at the time this was much more the exception rather than the norm.  A sad fact of the new NFL designs is that the days of many shoulder and sleeve stripes are gone, and those traditional teams who still have them as a jersey element, turn them into vestigial or truncated stripes, see San Francisco and Indianapolis for other examples.

2012 saw the only major change to the uniform package ever, as the classic Panthers logo was replaced with a more updated version of the old cat, complete with new word marks.  The new logo coincided with Nike's take over of the NFL uniform contract and, as mentioned previously, where most teams adopted Nike's uniform template, the Panthers were one of a few hold outs who changed almost nothing from their classic look, the only exception being the newly designed logo, and the addition of the Panther's motto "Keep Pounding" to the inside of the collar. 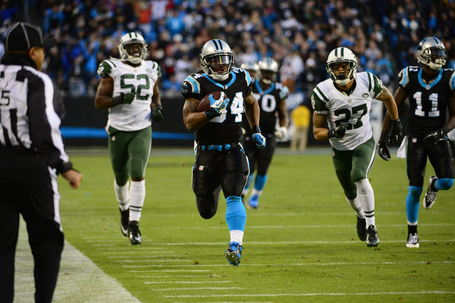 This brings us to today, with the most recent big uniform news being the addition of a black set of pants to the uniform catalog.  This silver/black/black set was voted the greatest uniform in NFL history by NFL.com by a *ahem* motivated Panther's fan base, and as recently as my last post was called "the best in the NFL no contest" by 252jordanisland8.  Unlike many teams, however, this is not a mix and match element, it has only been worn with the black jersey and its my understanding, that they will only ever be worn with the black jersey for the foreseeable future.  I, like most of you, love the black pants, but my favorite part of this look is the blue socks which brings the whole kit together and avoids the dreaded leotard effect evident here when the Saints match their black pants with black socks.

So with all the changes, and alterations over the years, the Panthers today look very much like the Panthers of 1995, a classic look that has, and should, stand the test of time.  If you are new to the world of sports uniform ascetics and want to learn more, I encourage you to check out Paul Lucas' great daily blog Uni-Watch, or head over to Chris Creamers Sports Logos.net, both are fantastic resources for all the major, and not so major, sports and leagues.  If there is an element of the Panther's uniform history I missed, please let me know in the comments, I would love to add it to my collection.