This year the Panthers celebrate their 20th year of existence with a memorial patch (seen above). Believe it or not, this is one of only a handful of notable uniform changes for this organization over the years. Although Carolina’s football club may seem to many traditionalist to still have that expansion look, their uniform ranks up with the likes of Dallas, Chicago, and Kansas City in its staying power, and in my humble opinion, the Panthers look is a classic uniform design.

Let me begin by saying that I have been a uniform nerd all of my life.  I have always loved sports, but I have had a special obsession with athletic ascetics, so since my local team came into existence in 1995, I have had a keen interest in all the changes and quirks in Carolina's style over the years 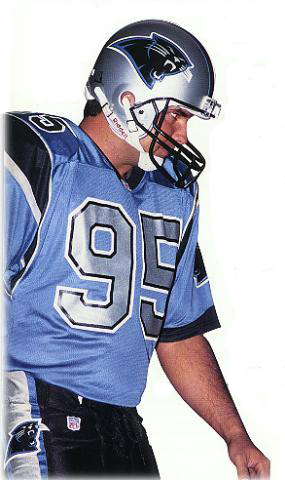 If you don't think the Panthers have a classic style, then lets look at some "old school teams" like Minnesota, Miami, and the Bills who have all undergone major uniform changes over the past few years.  In fact, the vast majority of NFL teams made slight alterations to their uniforms, like pant striping or collar colors/size once the NFL moved to Nike from Reebok in 2012, with only the Panthers, Falcons, Eagles, and the Raiders keeping the Reebok template in lieu of the new Nike Elite 51 design.  With the introduction of the black pants, I hear all the time "The Panthers really need to redesign everything" and to those who do not like our traditional look, I say turn an eye to our expansion brothers to the south, the Jacksonville Jaguars, who have undergone three distinct uniform eras, withthis newest design producing the second ugliest kit in the NFL, only recently being upset by the train wreck that the Bucs unveiled, who at least now look as embarrassing as they play.  So, although we have seen little change in the Panthers uniforms, there have indeed been changes, alterations, additions, and quirks over the years, so lets start from the beginning.

The original expansion prototype uniform featured a blue jersey with silver numbers, black pants, and a silver, stripe less lid.  The blue jersey is very similar to the alternate blue introduced in 2002, with similar striping, the primary difference being the silver numbers on the chest, and black TV number.  The black pants, although new and exciting today, were a part of the initial set, although the "new" black pants feature a blue stripe where this prototype had a silver stripe.  There was also a prototype white jersey which looks much like the white jersey today, except for the double number outlines, and some slight changes to the shoulder stripes. 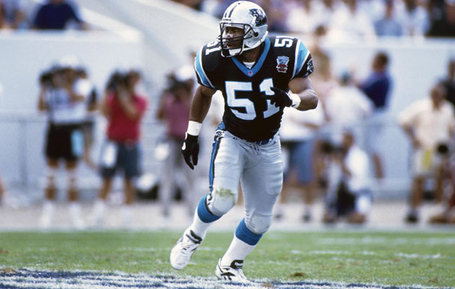 Although the expansion prototype uniform had an... interesting look, we all know that this was not the set the Panthers debuted on the field during the 1995 Hall of Fame Game.  Here we see the uniform combo which became half of the classic set, silver helmet with curved black stripes outline in blue with the primary Panther logo, Black jersey, white numbers outlined in blue, looping blue shoulder strips reminiscent of the old Colts stripes, and silver pants with blue stripes outlined in black, featuring the same helmet logo on both the shoulders and hips.  The white jersey featured the same shoulder stripes as the black, but with black numbers outlined in blue, and is matched with white pants whose stripes mirror the silver pants.  The 1995 season uniform came complete with the "Inaugural Season" patch on the right chest of the jersey. 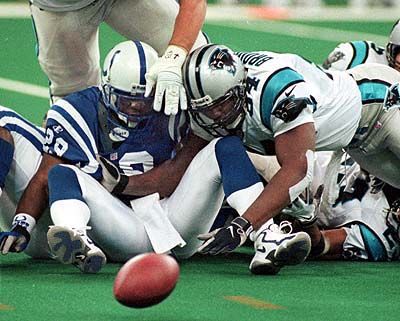 With the exception of the inaugural season patch which was only present on the 1995 kit, the Panthers would only wear these two uniform combinations, silver/black/silver, silver/white/white, until 2002…. except for once.  The last game of the 1998 season, in a game against the Colts, the Panthers decided to match their white jersey with their silver pants.  This the the first time, and only time, this uniform combination has ever seen the field.  I have heard that the team decided to go with this unorthodox combination as a show of support for embattled head coach Dom Capers, although I have not been able to find any verification. 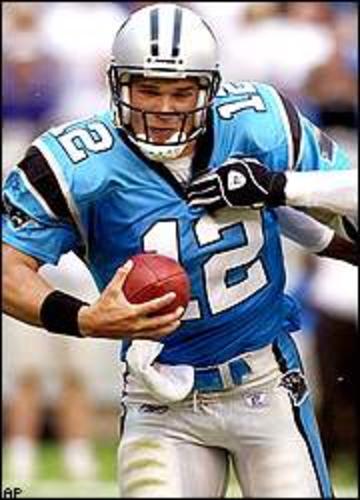 In 2002, the Panthers added an alternate "electric blue" jersey to the standard rotation in a game against the Buccaneers, seen here in a rare Randy Fassani sighting.  With Reebok taking over the NFL contract in 2002, we began to see alternate jerseys become a common sight in the league.  In addition to the Panthers blue, we also saw the Browns break out an Orange alternate, the Saints gold third, and the Jaguars introduce a black jersey.  This would really be the first year in which NFL teams began to adopt alternate jerseys, although Thanksgiving throwbacks had been common for many years.

So in their first ten years of existence, there were only really 4 notable (and perhaps not so notable) uniform changes.  In Part II, we will look at how, with the explosion of new designs, alternate jerseys, and new jersey cuts, has impacted the Panthers style.