I took a Panthers gnome to training camp and got it signed by a lot of really confused players and executives.

Share All sharing options for: Mr. Gnome goes to Spartanburg

Some time ago, James Dator wrote a piece on the 'worst' Panthers merchandise money can buy. Within that story was an item that seemed tailor made for me. Never have I worn a Panthers branded pair of long underwear of which the in-seam fit so snugly, so perfectly, as this item fit my gnome de guerre.

Of course, just having a logo branded on its hat and teddy bear was not enough for me. I knew that dedication and love must be felt as well as seen and so I decided to have tokens of that spirit branded into its flesh by the pens of as many Panthers as I could find. So we found ourselves last Sunday in Spartanburg, SC ready to embark upon a grand adventure, a word that is sygnomeynous to me with the smell of sweat, Sharpie, and sweet, sweet victory.

Training camp is always a great time to meet fellow members of CSR or, as I refer to them privately, victims. In addition to the staff, augmented by the noticeable absence of Mr. Dator, we had the pleasure of hanging out with Scrantsj, BeastHybrid, Cole, GooseCreek, I<3Luke5969 (a new account started by BW's wife), and probably more with whom we enjoyed Monster Subs' famed Kraken sandwich. Everyone was nice and stuff, but of particular note was GooseCreek (GC). He became my sensei after being gnomeinated by Jaxon and BW as our resident expert in autographology.

The key to getting your Panthers gear signed at the end of practice is to be in the right place at the right time. The right time is the end of practice and the right place is up against the fence they use to keep us off the field. It is really a very simple key and the lock gets a little crowded sometimes. Thankfully, GC expertly positioned me behind a trash can from where I could wield my gnome with near legal efficiency. The day's work started slowly, gnomebody seemed to want to leave practice first.

"Who is that old guy?" I asked of GC, tactfully indicating that I was not referring to his own venerable personage. Gnomeatter who it was, they seemed like a perfect target.

And so I met and had my gnome signed by the team president who was very kind to ask me what I thought of the stadium renovations that I have not yet experienced. His signature was a relief, a green glass bottle of Coke in a Pepsi product world. He spared me from the ignomeiny of leaving without a single signature.

The real games began after he passed; practice was winding down. Players and other notables began trickling back towards the locker room.  One figure, above all, attracted the attention of the ravenous crowd around me though.

A stoic man is our general manager, one who could be considered to lack the warmth of the South by those who do not know him. I judged him differently. Regardless of the quality of his grandfather's shorts that he wore to practice, I believed the heat of Spartanburg would permeate even the frostiest New Yorker's core. And so I watched our Odysseus pass, unheeding of any siren's call. Any siren, that is, but me.

Dave stopped. He turned. I could scarcely believe that he would be snared by that trap. I suppose that everyone, be they a ferocious bear or beset by golden locks, knows the smell of soup that is just right. Following the pungent urgency of my call, Gettleman jogged over from about 20 yards away. 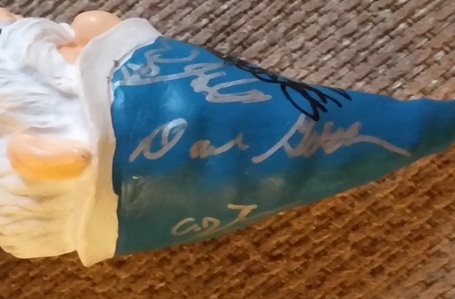 The Tight End never shook his expression of bewilderment after that and he was not the last to be so mystified. Some, however, fully enjoyed signing the gnome. Jason Williams, our back-up linebacker and Special Teams ace gleefully signed the gnome's butt flap. It was a surprisingly successful venture. 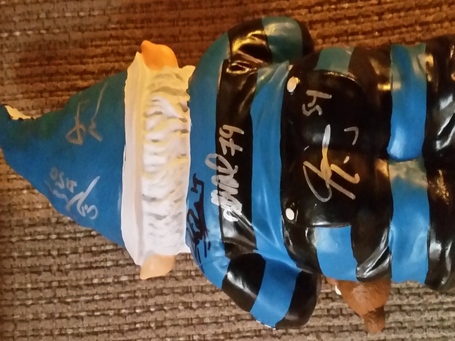 Altogether, the gnome was signed by Danny Morrison, Dave Gettleman, Luke Kuechly, A.J. Klein, Jason Williams, Byron Bell, Nate Chandler, Brenton Bersin, Josh Norman (fresh off the exercise bike!), Fernando Velasco, and Kealoha Pilares. I could have chased down Cam, who was trying to conduct an orchestra of zombies with no shotgun at hand, but instead opted to hang back and get Norman and Pilares. Somehow they seemed more appropriate. 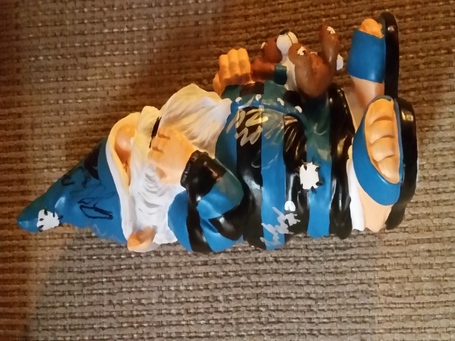 Ending the day with my gnome begirdled with that many signatures was a pleasant surprise to those of us present. Several players seemed intent on walking past and hitting the showers after a long day of practice before they spotted the gnome. I must offer my thanks to Cole, there in spirits, and GooseCreek, whose company and patience is responsible for most of the day's events (read: he is to blame).

The greatest part of this all? There was an accident in processing the order that brought this gnome to my doorstep. That accident means there is a brand new and clean gnome awaiting training camp 2015. Who do you want to sign the gnome, and where do you want their signature? Leave your suggestions in the comments because next year that little buddy is heading back to Spartanburg or, in other words, its rightful gnome sweet gnome.