A play in the lives of the Carolina Panthers

Touchdowns and turnovers are afforded all attention and remembrance. What picture is there to be painted from a completely innocuous play?

Share All sharing options for: A play in the lives of the Carolina Panthers

Entering the Week 6 contest 1-3, Carolina was facing a likewise maligned 1-3 Vikings squad, fresh from an overseas victory over Pittsburgh. A 1-4 start would spell doom for the Panthers playoff chances, making this autumn congress a critical matchup for Carolina.

Able to harry and harass Vikings QB Matt Cassel, the Panthers defense turned Minnesota over once in the first quarter. On the ensuing possession, Carolina cruised into the end zone on the back of two fourth down conversions. A 15 play drive consuming 9:25 in game clock. Trading punts, Minnesota would again be forced to surrender the ball.

Two first downs and a handful of plays later, we reach the selected play. There's no overt drama. No game altering ramifications. The play results in an incomplete pass.

Clock running, Carolina holds the ball just shy of midfield. First down and ten midway through the second quarter.

An adversarial game, there is more than a hint of chess to football. The Panthers employ 21 personnel (2 RB's, 1 TE, 2 WR's), which avails Minnesota of the base 4-3. Rather than lining up in a traditional I-formation alignment, Richie Brockel splits out wide. Linebacker Chad Greenway trails the fullback. Soon thereafter, Tolbert flees the backfield, joining TE Greg Olsen wide left. Carolina has an empty back set. Similar to the patellar reflex, when most defenses see an empty back set, it triggers a blitz.

Both backs draw a linebacker outside, a tell the Vikings are in man coverage. The ROLB approaches the line of scrimmage, feet offset, intimating blitz.

Carolina has packaged concepts, as is the case on many of the team's short area pass plays. Essentially there are two different plays within one. Usually there is one zone beating concept, and one man beating compilation. It's on the QB to read the defense and choose the correct route combination. 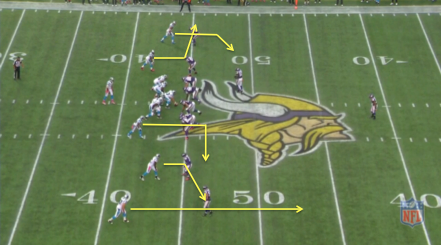 To the top, Tolbert and Olsen are running a concept designed to beat tight man coverage. To my knowledge, the play below isn't exclusive. However it appears best suited for a zone coverage, or off man coverage. Seeing as both routes are breaking away from Newton, against press man coverage, perfect routes would place the DB's between Newton and his receivers. Meanwhile, Richie Brockel acts as decoy. With his 9-route Brockel holds the safety deep, offering one on one match ups for Smith and LaFell.

Taking no chances, because Carolina has engineered a Minnesota blitz, both these concepts are fast developing. Should the protection fall apart, Newton will be able to fire a pass off.

Well designed, this play is missing out on one opportunity. 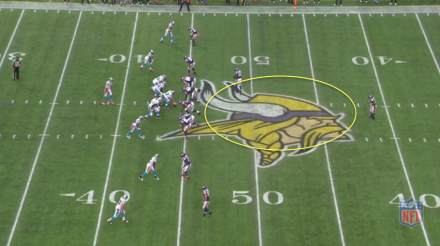 The middle of the field is left exposed. But none of the routes are directed that way. Carolina has created this situation, but they do not take advantage. 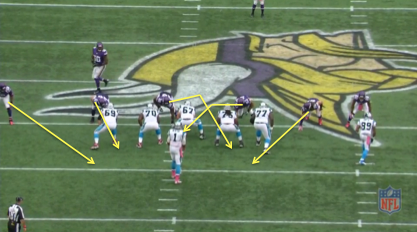 The benefit of film study, Carolina's protection is prepared for the Vikings pressure. The Panthers slide their protection left. 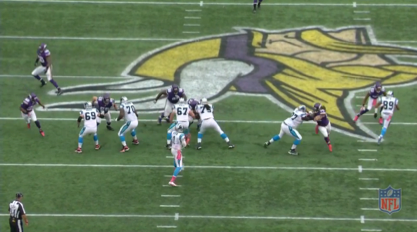 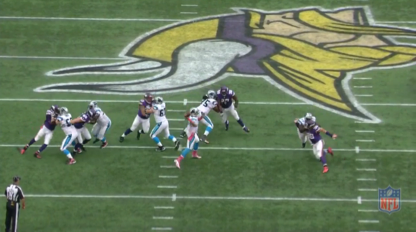 Without being in the meeting room with Newton or the offensive coaches, it's tough to levy total judgement against the quarterback. That being said, Newton, against tight man coverage, throws to the zone/off man concept.

There are a number of possible explanations. Not all of them are absolving. There's no way Newton misread the coverage. The positioning of the defensive backs and the trailing linebackers scream man coverage. It appears, either of his own volition, or that of his eye in the sky, OC Mike Shula, Newton broke protocol purposely. Perhaps Newton decided pre-snap he was throwing to Steve Smith no matter what. If Newton hits Smith in stride, the veteran is one broken tackle away from a major gain. But that's not what the play called for. 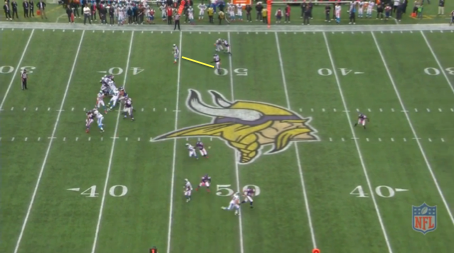 Wide left, Olsen stems his skinny post route. The safety does not bite; Olsen meets the defender's press with a swim move. Legal or not, the safety's grip on Olsen is strong; the TE cannot break free. Knowing his man has to cover a greater distance, Tolbert makes his break quickly, affording the back over four yards of separation. The coverage dictates Newton target Tolbert. 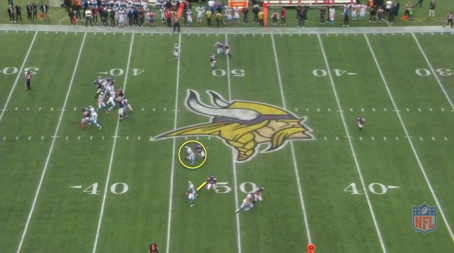 On the other side of the field, LaFell tries to shake the corner with his release, to little effect. Immediately thereafter the LSU product plants hard on his break, generating two steps of separation. Running a quick out route, Smith runs into the teeth of the cornerback, forcing the defender's hand. The CB, Chris Cook, holds his ground and presses Smith. Able to disengage, as soon as Smith turns back to the passer, the ball is in the air.

Though Smith has less separation than LaFell, there's still opportunity for Newton to complete the pass. 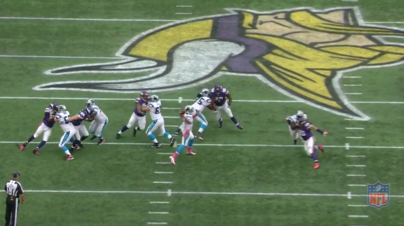 Newton cocks his arm, plants his front foot, and drives the throw, granting the passer more control over the ball. 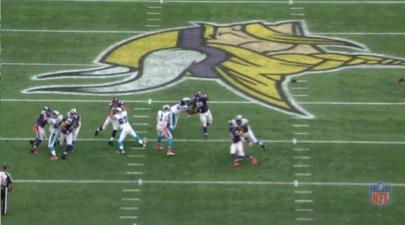 With a full quarter twist of his hips, the third-year QB puts a lot of power into the throw. 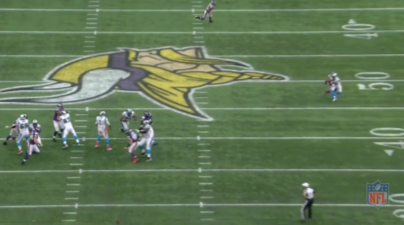 But the pass is behind Smith. Newton isn't a very accurate passer. I'm not looking at completion percentage, or overthrows caused by mechanical flaw. He'll deliver some breathtaking touch throws, but on many routine patterns, Newton misses ideal placement, by small margins as in this instance.

If Newton places this ball ten inches to the right, Smith is able to shield Cook, and make an uncontested reception. However, the wide receiver is not clear of blame either. One of the franchise greats, Smith doesn't get his arms fully extended, nor his hands in proper positioning. As a result, Cook is able to rake his arm down, breaking up the pass.

There is no time to ruminate. The offense reconvenes in the huddle, and Newton calls the next play. Second down and ten. In the grand scheme, this play is insignificant. One play in a drive that culminated with a Mike Tolbert touchdown. One play of 126 total.

Of course the Panthers would triumph, scoring two more touchdowns in the third quarter en route to a 35-10 victory. Carolina wouldn't lose again until December.