Billeted as the answer at nose tackle, where exactly did Star Lotulelei play last season?

Without question the Panthers most talented defensive tackle, Star Lotulelei has been ubiquitously celebrated in Carolina since his acquisition one year ago today. Lauded as the long lost anchor of the defensive line, Star was afforded high expectations, which, to many, he surpassed during his rookie campaign. 6'2" 315 lbs. says the team website, Lotulelei has the prototypical size for an interior lineman, a war-daddy, a hog-mollie. And after spending almost all of his time at nose tackle in college, it was naturally expected that is where he would continue in the pros.

Playing just under 60% of the defensive snaps, Lotulelei was on the field more often than any other defensive tackle. His extensive playing time saw him line up at just about every conceivable position on the defensive line. Even one play at defensive end. But when push comes to shove, where did Lotulelei spend the majority of his time? 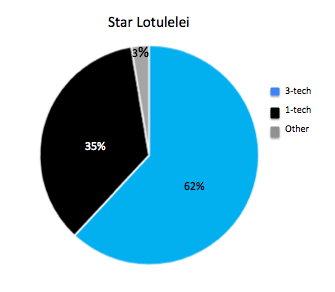 Lotulelei was primarily an under tackle, or 3-technique (3-tech for short). 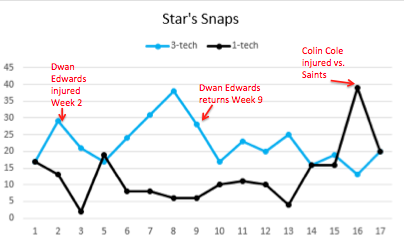 Circumstance would certainly play a role, but the Panthers coaching staff made a concerted effort to play Lotulelei at 3-tech with frequency.

For much of the season the DT's were split into pairings. Star often ran with Colin Cole, while fellow rookie Kawann Short was plotted with Dwan Edwards. Cole and Edwards, the elder statesmen of the group, were not moved around nearly as much as their counterparts. Edwards was almost exclusively a 3-tech, Cole a 1-tech. That's not to say the pairs wouldn't flip flop many times over the course of a game.

When Edwards was injured versus Buffalo, it was primarily Lotulelei who was tasked to pick up the slack at 3-tech; you can see his 1-tech snaps plummet. Meanwhile from Weeks 6-8, Star's 3-tech snaps increased steadily. With Edwards' return, Lotulelei saw his playing time at 3-tech decrease, coupled with an increase at 1-tech.

On the other hand, when Cole sustained an injury during the first quarter versus New Orleans, Lotulelei was relied upon to carry the mantle at 1-tech. Playing with Cole, Star's first five snaps in Week 16 were spent at 3-tech. After the veteran went down, Lotulelei finished the game playing eight snaps at 3-tech, and a whopping 39 snaps at 1-tech as the Saints controlled the ball.

Another noticeable trend: In three of the Panthers four losses (Buffalo being the exception) the former Ute played an equal, or greater, amount of time at 1-tech to 3-tech. Of the five total weeks meeting this criterion, the Panthers won only twice; the last two weeks of the season, versus New Orleans and Atlanta, both of which were decided in the final minute of the contest. Of course this makes sense. With the lead, opponents are much more content on running out the clock. 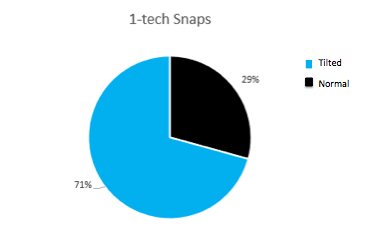 Far more often than not, Lotulelei was tilted; lined up at an angle on the center. 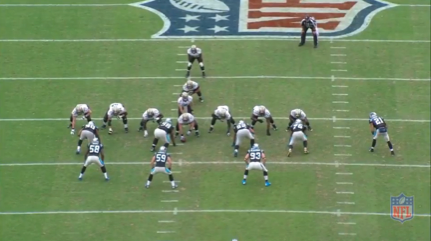 From the tilted alignment, a lineman with a quick first step can blow up a play. If he beats the center, who must move laterally at the snap, Lotulelei is in the backfield. The better the player, the more often you will see opponents run away from him. Especially useful on running plays, the tilted nose tackle compels a double team from the adjacent guard, freeing up a linebacker, if only for a second or two. In summary, the tilted nose tackle forces the offense to do one of three things: double the tackle, potentially leaving a linebacker unblocked; run away from the tilted player, playing right into the defense's hands. Or gamble that the nose tackle doesn't destroy the QB/RB.

Not limited to the nose tackle, Lotulelei would also be tilted at 3-tech, just about eliminating option number one.

Comparing Star to a peer, the Panthers 2013 second round pick Kawann Short spent roughly two-thirds, 68%, of his time at 3-tech. Short and Lotulelei would play a similar amount of snaps at 1-tech; Short totaling in at 31%. For the duo, much of their value lies in their versatility.

With next season likely being the last in Charlotte for Edwards and Cole, the Panthers will pick up at least one more defensive tackle in the coming years. The question being, will Carolina look for another 3-tech, pushing Lotulelei towards 1-tech, or a nose tackle, allowing Lotulelei to play under tackle as he did last season?