Film Review: How the Panthers used their safeties in 2013

With the departure of Quintin Mikell and Mike Mitchell, the Panthers had a lot of question marks in the secondary this offseason. The safety position played well above expectations last year, especially with the loss of incumbent starter Charles Godfrey early on in 2013. But Dave Gettleman has addressed the question mark at safety with the acquisitions of former Saint Roman Harper and former Falcon Thomas DeCoud. Today I'm going to evaluate how the Panthers used their safeties in Sean McDermott's defense last year, and try to project the usage of the new acquisitions.

Share All sharing options for: Film Review: How the Panthers used their safeties in 2013

Typically, the Panthers would use Quintin Mikell and Robert Lester at the strong safety position. But that didn't necessarily mean that the strong safety played as the "box safety". In fact, prior to Godfrey's injury, he was often the one playing in the box even though he was technically listed as the team's "free" safety. The Panthers would use also play Mike Mitchell at SS and use him as the box defender. Based on film review of the Buffalo game (the only game where the Panthers entire safety core was healthy and involved), Sean McDermott never had a designated "box safety". 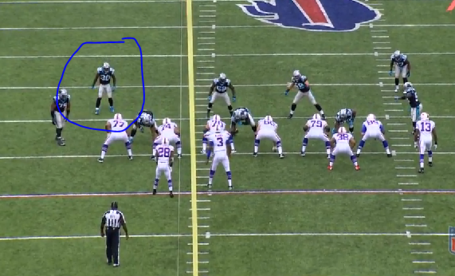 In this play, Mikell is playing the strong side of the line but has roughly a 10 yard cushion. Godfrey steps up to just behind the depth of the linebackers to show an 8 man box. The Panthers defense is currently in a 3-4 set. 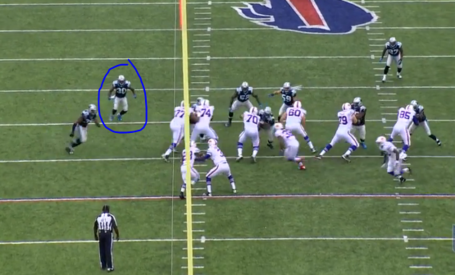 Godfrey steps up to the back end to play the weakside as Hardy starts to crash inside until he sees the triple option developing. 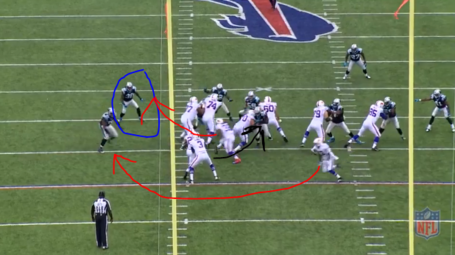 Manuel elects to give the ball to the tail back as both Hardy and Godfrey are playing the backside. The tailback wiggles through the hole for a 3 yard gain. Godfrey was often playing closer to the line of scrimmage in this game when Mikell was in. However, when Mitchell was brought in, Mitchell became the box safety and usually played closer to the line of scrimmage. 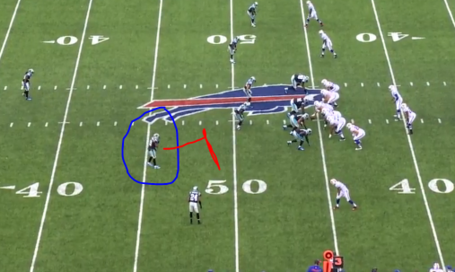 The Panthers had the luxury of using their free safety and strong safety as box defenders and each could do so effectively. While the departures of Mitchell and Mikell certainly didn't help in free agency, the acquisition of Roman Harper (who has a great history of playing the box) in addition to a healthy Godfrey should allow Sean McDermott the flexibility he's accustomed to at the safety position. Thomas Decoud also allows for the Panthers to use Godfrey as the nickel cornerback, Captain Munnerlyn's role in 2013.

Charles Godfrey was often tasked with playing as a single high safety in the first two games as well. Godfrey's speed and coverage skills also suited him for this role. 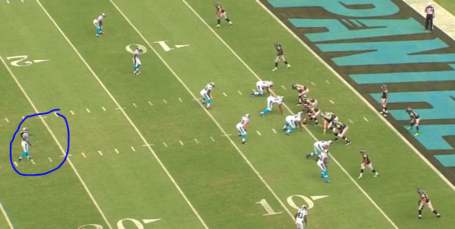 However, Quintin Mikell, and later on in the season Mitchell, could also assume this role with little drop off. A lot of that has to do with the front seven (see Seattle and safety Earl Thomas), but it again shows that McDermott and Rivera seem to covet versatility from the safety position. 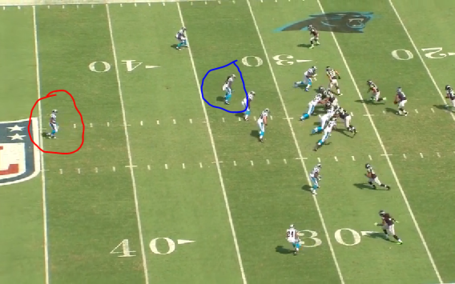 Charles Godfrey was also fast enough pre-snap to assume this role out of a disguised coverage.

The Panthers defense offers a variety of different looks and having a safety like Godfrey around allows for more versatility. Players like Mikell and Mitchell were used (prior to Godfrey's injury) in sets that best suited their talents. Mikell made quite a few plays going after the quarterback on the blitz as well, and it appears that's what Roman Harper was brought in for.

One thing that was true about the Carolina Panthers last year, they didn't always blitz but when they did they got the sack (cue the Most Interesting Man memes). That includes the safety position, where three of the four safeties that started over the course of 2013 were effective blitzers.

In this next play, Mikell starts from the usual 12 yard cushion, before rolling down to the box. 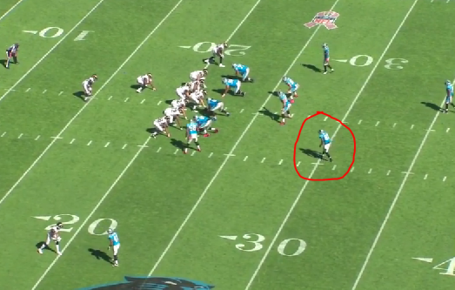 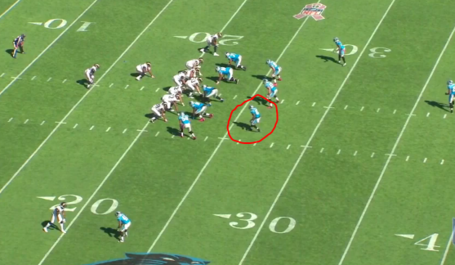 Mikell blitzes at the time of the snap, and manages to get some pressure. The tailback steps in to block him, but Mikell gets just enough push to get a hand on the throwing arm of Bradford and adversely affects the throw. 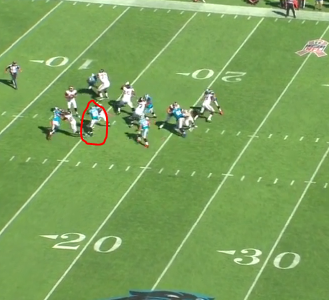 This play results in a pick-six by Captain Munnerlyn, and is one of my favorite plays by Mikell this season.

McDermott also called blitzes with safeties lined up behind the box as well. In this next play, Mitchell is lined up as the free safety. Oftentimes in McDermott's defense, the strong safety backs out of the strongside if there are multiple receivers lined up there while the free safety steps up a bit to the weakside. This look shouldn't seem out of the ordinary to Colin Kaepernick. 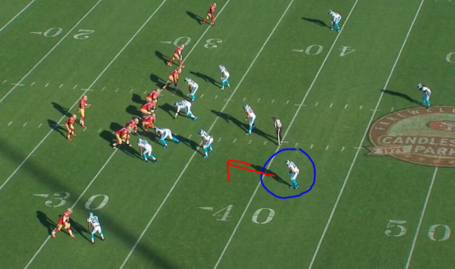 However, at the snap Mitchell starts sprinting at the line, just as a hole opens up, giving him a free shot at the quarterback. 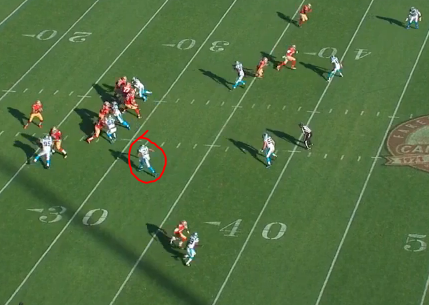 Mitchell gets credited half a sack because Charles Johnson also gets off his block.

In this next play, Godfrey does an absolutely incredible job of disguising the blitz without creating wasted time. Godfrey starts at the top of the defense, Seattle motions Marshawn Lynch out of the backfield. Godfrey adjusts his alignment. 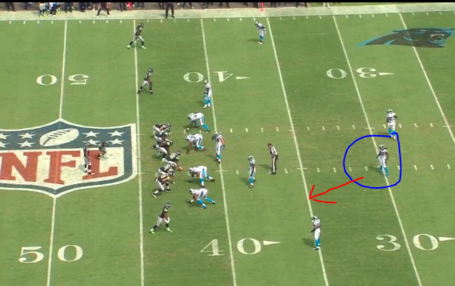 Seattle motions Marshawn Lynch to the outside receiver position, Godfrey now appears to be over the top of both of them. 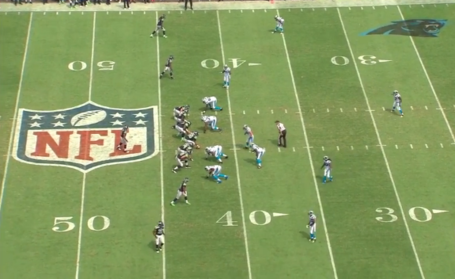 Godfrey blitzes at the snap of the ball and gets a free lane on Russell Wilson, resulting in a sack. 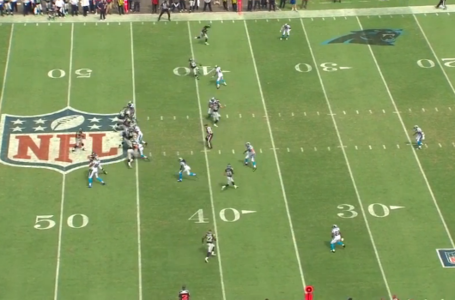 The play was nullified post-snap by a personal foul and ejection by Frank Alexander, but between the whistles this was an outstanding play by Charles Godfrey.

A lot of fans didn't like the Panthers letting go of Mike Mitchell, and many fans are now calling for Charles Godfrey to be released in favor of more cap room. But looking at the tape of Godfrey's two games in 2013, it is clear to me that there was a reason why Godfrey was constantly on the field while Mitchell and Mikell rotated in and out -- he was their best player in coverage. This isn't a knock on Mitchell, he did an outstanding job at free safety when Godfrey went down with his injury, but was he worth the money Pittsburgh threw at him? I don't think so, at least not with the front seven we have here in Carolina. Charles Godfrey on the other hand is someone I REALLY would like to keep around. If Gettleman is able to get him to take a paycut then by all means, but Godfrey showed a lot of value prior to his season being cut short. If Godfrey can return to form, we may not even remember Mike Mitchell's name.

As far as Roman Harper and Thomas DeCoud go, Roman Harper should provide the box safety this defense needs. He will very likely be used exactly the same way Mikell was. Thomas DeCoud on the other hand appears to be more of an insurance policy for Charles Godfrey, but having DeCoud allows for us to kick Godfrey into the nickel when needed should the Panthers not find a nickel corner in the draft. Mitchell and Mikell will be missed here in Carolina, but I think Charles Godfrey should be kept around. His versatility is something the tape indicates is a big part of being a safety in McDermott's defense.