In 2012 it was Kendall Wright. In 2013, Tavon Austin. So far in 2014, Brandin Cooks and Odell Beckham, Jr. Every small WR with big game seems to get compared to Smitty...he is the prototype. It's like the never-ending search to find the next Jordan.

We know that Smitty has a unique blend of skillsets that are hard to duplicate. Incindiary speed, an ability to attack the football and win at the catch point, hands, route running, toughness, and leadership. Many guys can have a few of these, but rarely does a guy have all of these qualities.

Just for kicks I would like to mention another wideout that I don't see getting much pub: 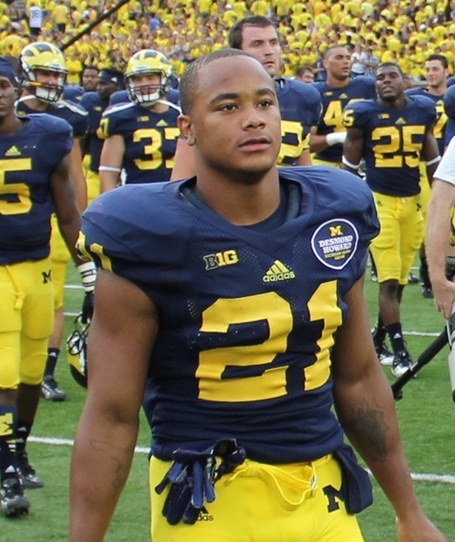 A former RB, QB, and safety in high school, you can see a little of each of these positions in Gallon's game. His high school coach felt that he was the smartest guy on the team. With the ball in his hands, he runs like a running back. He has an understanding of opposing defenses like a QB. And he plays as tough as a safety.

After his October torching of Indiana, he holds the Big 10 record for receiving yards in a game (369). While Gallon dominated on the outside in college, he probably best projects as a slot guy in the NFL..

Still don't let his height fool you though. Gallon has a good amount of weight for his size, possessing a stocky, muscular build. That shape helps him to bounce off of defenders, and makes him one of those guys that is tough to tackle. His 15 reps on the bench put him ahead of guys like Kelvin Benjamin, Mike Evans, Jarvis Landry, and Donte Moncrief. And he weighs just as much as WRs several inches taller. When it comes to size, don't think of Gallon as your average small WR.

Differences: He does not have Smitty's incindiary speed

Do I think Gallon is the next Smitty? No. I just wanted to talk about a prospect that I liked. But I can see some similarities.

And Gallon's signature play from last season does remind me some of Steve Smith, Sr. I think he could be a good pick-up for the team.

For good measure, here is the big game against Indiana

Jeremy Gallon vs Indiana 2013 (via JmpasqDraftjedi)

I would draft Jeremy Gallon in the...