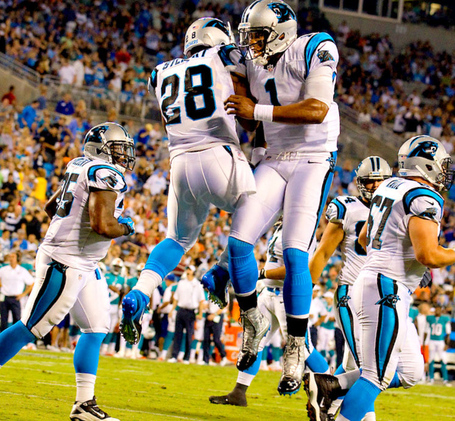 I know this is the time of the year that everyone likes to freak out, point out the flaws in their favorite team, bash the GM ruthlessly, but I'm here to tell you why that isn't the case for the 2014 Panthers. Think of the last time you went to the doctor's or dentist's office. You put you're health and well being in their hands because they are experts, and know what they are doing. Panther fans, I'm here to tell you we should put the same faith we put in our doctors, into Mr. Dave Gettleman.

People are jumping all over Gettleman; but you have to realize that he knows more than us, has more experience than us, and is much more knowledgeable in regards to our roster than us. Panther fans who are jumping all over Gettleman for not being urgent enough, or not signing receivers are taking things way out of proportion. The players we lost are all seemingly replaceable (sorry Steve), and other than Gross who retired on his own, no one player we lost should drastically change the dynamic of this team. I believe there are plenty of players who can fill the holes that were left, and we will have a suitable team.

Let's get this out of the way first, Gettleman doesn’t need to be told that he can’t go into the season with only King and McNutt as viable receivers. He’s not an idiot. Whether those WR’s come from the draft or free agency is yet to be seen with the most logical answer being both. Everyone is making a big deal over the receiving situation, but in reality, what did we really lose? We lost a legitimate starter and a decent #2 in LaFell who was overpaid, and is easily replaceable with a free agent such as Cotchery, Britt, Holmes, etc. We lost an aging veteran who was formerly a beast and dominant receiver, but in this point in his career is best suited for a 2/3 role, and playing the slot. We lost a speed demon who was again priced too high for us. Sure I would have loved to have retained Ginn, but not at that price. Frankly, when you look around the league, Ted Ginn is not an anomaly, there are plenty of receivers who do the same things he can do (i.e run like hell). Say we draft a receiver in either of the first two days of the draft (say Benjamin at #28), sign Cotchery (still up in the air right now) and sign a legit #3 (don’t have any specific name), we aren’t in too bad of shape. Add Olsen to that mix and you have quality passing options. This team can’t be built the same way as last year exactly, but as long as they can get the job done, which that trio could, we’d all be happy.

People like to make a big deal over our lack of activity in the free agency frenzy, but I'm here to tell you that we have, and will continue to make smart calculated signings. For instance we lost Mitchell and Munnerlyn in the secondary, and replace them with Harper and Cason/Thomas(potentially). Yes, there is a drop off in skill, but not by an amount where it is deadly noticeable. With our front 7 as lethal as it is, giving out the money Munnerlyn and Mitchell received would be foolish. Giving a guy like Harper the chance behind our front 7, will let him play more naturally, and will potentially elevate his game. We won’t be worse on defense at all; in fact, with an older Kuechly, Hardy, Lotulelei, etc. we could legitimately take a step forward.

Obviously the O-Line needs re-tooling, but our 2nd and 3rd round picks could/most likely will be used on the O-Line. Sprinkle in some 5th or 6th round receivers, a few training camp, free agent O-Lineman (similar to Wharton) and the line would be satisfactory, and you’d have decent threats for Cam to use. If I were to tell you that we could have a receiving core of similar or greater value, a second and/or third round pick on the offensive line, a secondary built very similar to how it was built last season, and a more experienced Cam Newton, Luke Kuechly, Star Lotulelei, and friends, very few people would say no to that.

Face it, we have it pretty good here in Carolina, and our problems don't even come close to the problems in say an Oakland or a Cleveland. Just relax and let front office do their thing. I, like everyone else, want every free agent to sign here, but in reality we have to target ideal players, and use our money wisely. So if you’re worried because we don’t sign the free agent you want, don’t draft the guy you want, don’t panic, Gettleman has a plan. Nobody can predict the future, but I highly doubt the dire situations everyone is talking about in March will even be heard of in October. Keep Pounding Panther Nation!

What do you hope front office does before the start of the new season?