The Friday Five: Keys to a Panthers victory over the Seahawks

The Panthers will face the Seahawks this Sunday at Bank of America Stadium in Charlotte, NC. Here are five things the Panthers need to do if they want to start the 2013 season with a win.

Share All sharing options for: The Friday Five: Keys to a Panthers victory over the Seahawks

The Carolina Panthers kick off the 2013 season when the Seattle Seahawks come to town, and Carolina will try to avenge an ugly 16-12 loss from last season where they failed to put the ball in the end zone save for a Captain Munnerlyn pick-six and were only able to produce a paltry 190 yards of total offense. The Panthers had an opportunity to win the game late in the 4th quarter, but the infamous "dirt pass" from Cam Newton to Ben Hartsock's feet on 4th and goal prevented Carolina from sealing the victory.

Hopefully things will be different this time around, because the Panthers need to win this game. The first game of the 2013 season is important for Carolina because they need to prove to everyone that they are capable of getting off to a strong start under the Ron Rivera regime. In their previous two tries they have been unable to accomplish this feat as they started a putrid 2-8 in both 2011 and 2012. The Panthers have yet to win a season opener under Rivera, and if they want to change that trend this year and claim victory over Seattle they are going to have to put forth their best effort in all three phases of the game.

Let's take a look at five keys to victory in Sunday's game against the Seahawks.

For full coverage on the Seahawks be sure to visit Field Gulls, SB Nation's Seattle Seahawks community.

This one is pretty obvious, but if the offensive line can't keep Cam Newton off his back the Panthers don't stand much of a chance. Carolina has plenty of issues on the right side of their offensive line, but they could be helped by the lack of health along Seattle's front four. DE Cliff Avril and DTs Tony McDaniel and Brandon Mebane have been sidelined with injuries but were able to return to practice yesterday, and DTs Chris Clemons and Jordan hill were unable to practice. Their status for Sunday's game is currently unknown.

Regardless of who is lined up for Pete Carroll's defense on Sunday, Carolina's hog mollies have to prevent them from disrupting Cam Newton's afternoon, otherwise Panthers fans could be in for a long afternoon of sadness.

This one is pretty obvious too.

In last season's matchup, the Panthers were somewhat successful in containing Lynch. He rushed for 85 yards on 21 carries, but didn't score a touchdown.

Russell Wilson was decent against Carolina last year, going 19/25 for 221 yards with one touchdown and two interceptions. He also rushed five times for 12 yards. He wasn't a difference maker in the game, but he also didn't lose it for Seattle which is all you can really ask from a rookie making his fifth career start. The problem for Carolina on Sunday is that Wilson isn't a rookie anymore, and he's had plenty of time to get used to playing in the NFL so it will be tougher for the Panthers to contain him this time.

It's up to the front seven to contain Lynch and put enough pressure on Wilson so he doesn't have time to expose the secondary. The Panthers' defense is strong up front, so they should be up to the task. If they're not, it could be a long day for Ron Rivera's squad.

Don't leave points on the field

One of the biggest concerns for the Panthers going into this game is whether or not the offense can score touchdowns. Settling for field goals instead of putting the ball in the end zone will not only frustrate every Panthers fan and fantasy football player (other than Graham Gano owners, of course), it will also allow Seattle to stay in the game and potentially win it. If the Panthers want to win this game, the offense will have to do its job and score touchdowns. 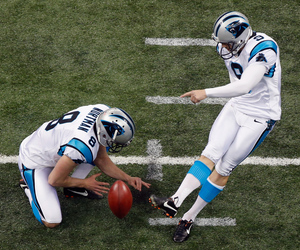 Panthers kicker Graham Gano is 2/3 in extra points and 1/2 in field goals in his one career game against Seattle.

Special teams must be special

Despite all the flack it gets from fans, the special teams unit is a vital component of a football team. Field position will be very important this Sunday, so the Panthers will have to ensure their punt and kick coverage units are at the top of their game. If the offense stalls against Seattle's defense, the punt team will have to be able to control field position.

But have no fear, Panthers fans. We've got Brad Nortman. Everything's gonna be alright!

Not only is field position important, but the field goal unit could be a vital factor in Sunday's game as well. It's not good when the offense has to settle for field goals instead of touchdowns, but three points is better than zero points so Graham Gano will have to deliver the goods when his number is called .

One of the oldest adages in football is that you have to win the turnover battle to have success in the NFL. This game is no different. The team who wins the turnover battle will most likely be the team that wins the game, so if the Panthers want to walk away on Sunday afternoon with a 1-0 record they must protect the football on offense and force mistakes on defense. It would also be nice to see the defense score a few points to lighten the burden of the offense, but keeping the ball out of Wilson's hands is the surest way to guarantee a victory.

TL;DR - They can't score if they ain't got the ball, son.

That's it for this week's Friday Five. If the Panthers can follow this road map against the Seahawks on Sunday, they should be able to claim their first victory and be off to a good start for the 2013 campaign.