Why Panthers DE Greg Hardy will have a big performance Sunday

Greg Hardy could have a huge performance this Sunday against the Buffalo Bills. Here's why.

Share All sharing options for: Why Panthers DE Greg Hardy will have a big performance Sunday

Although Greg Hardy did not register a sack against the Seattle Seahawks last week, he was the best defensive end on the field for the Panthers. He had an excellent performance, collecting four tackles, three quarterback hits and one quarterback hurry. This was good enough to get him a +2.7 overall grade from Pro Football Focus, which was the highest on the team at defensive end.

Sometimes you have to go beyond the box score to look at how much of an impact a player made on the field. Here’s a GIF of an amazing play Hardy made against Seahawks running back Marshawn Lynch in the fourth quarter of last week’s game:

It was one of the most impressive defensive plays of the game to me. It also shows how much Hardy’s run defense awareness has improved over the last two years.

On this play, Hardy lines up as a 7 technique defensive end in the Panthers base 4-3 defense. Hardy will stunt the A-Gap (between the center and guard). 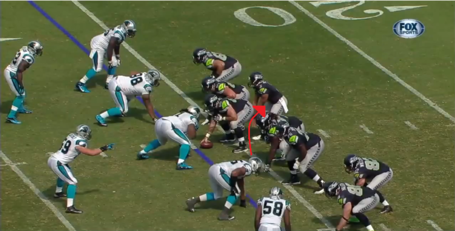 Hardy’s lateral explosion off the line of scrimmage is extremely impressive. 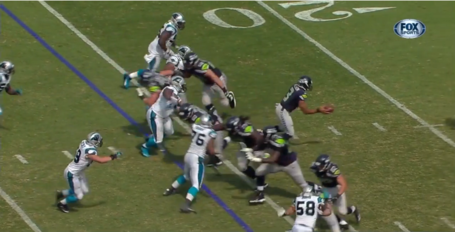 Without even using a pass rush move, he is able to burst pass the Seahawks left guard James Carpenter, who gets destroyed on the play. 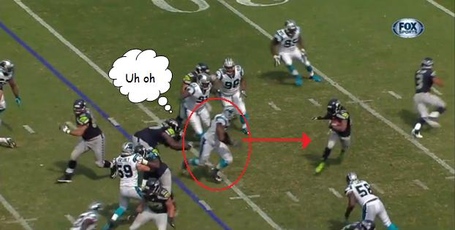 Now that he’s in the backfield, Hardy once again shows his amazing change in direction ability as he attacks Lynch. 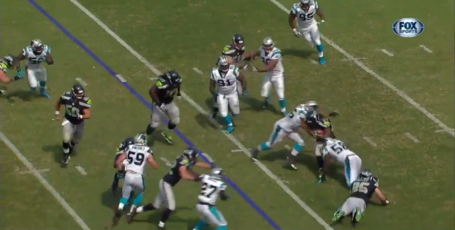 With the help of Thomas Davis Hardy is able to bring Lynch down for a 1 yard loss.

The scariest thing of all is that Hardy was able to do this despite not being fully fresh in the fourth quarter. It was clear that the ejection of Frank Alexander affected the entire defensive line’s performance down the stretch, including Hardy’s, as he was forced to play 59 snaps, or 91% of the total defensive snaps. This number is significantly higher than his average last season, which was 47 snaps, or about 71% of the defensive snaps. Despite being on the field for almost the entire game, he was still able to make some huge plays late.

With Frank Alexander returning to the defensive end rotation, expect to see a fresher and better Greg Hardy on the field this Sunday against the Bills.

Now, why Hardy could have a big game on Sunday:

If there is one X-Factor on defense, I think it is Hardy -- he could have a monster performance, simply because of who he might be matched up against.

As a traditional 4-3 defensive end lined up as a six or seven technique, he’ll most likely be facing off against Bills LT Cordy Glenn, who is a solid player. Although Hardy could have some success against the second year tackle, if the Panthers are smart, they should develop their defensive game plan so that Hardy sees more work on the interior, where he’ll be matched up against Bills LG Colin Brown.

Brown is the Bills replacement for Pro Bowler Andy Levitre, who left the team in free agency. However, Brown has been a disaster at left guard so far, as Pro Football Focus gave him a -4.9 grade in run blocking, and a -3.2 grade in pass protection last week against the Patriots. This was the worst grade overall of any player in the entire NFL in week 1.

When watching some of the Bills-Patriots tape I also noticed that he was the weak link on the Bills offensive line. He looked slow and sloppy as a run blocker and had a rough time stopping the pass rush from Patriots defensive end Rob Ninkovich and nose tackle Vince Wilfork.

On Sunday I would expect the Panthers to exploit this match-up by playing Hardy more at the under-tackle position in a 4-3 Under scheme. I also expect to see more inside stunts where he can not only get pressure up the middle, but also be an excellent run defender, just like in the GIF above.

This is why I have a strong feeling that the Kraken will truly be released this Sunday against the Bills -- do you? Vote and comment below!