Defensive football is a game of allocating resources. When you have a cornerback like Darrelle Revis, you can leave him on his own and move his would-be help to another part of the field. When you have a front-seven like the 49ers, you can afford to play two deep safeties at all times to help out in pass coverage.

Going into 2012, Carolina Panthers head coach Ron Rivera was short on defensive resources. His secondary was set to be one of the worst in the league (and this is before cornerback Chris Gamble was lost for the season after only four games), his interior line had seen no real upgrades coming off a season in which the team finished 25th in rush defense and his linebacking corp consisted of a rookie and two players coming off major injuries.

Fast forward a year and there's talk about the Panthers' defense being one of the best in the league in 2013 after finishing tenth in total defense last season.

So how did Rivera pull it off? By making things simple.

After taking a look at the tape of the Panthers' defense over the last month of the 2012 season, it was not hard to figure out its strategy. Rivera knew he needed an eighth man in the box in order to stop the run thanks to an interior defensive line that couldn't move an offensive lineman if he was sitting on a dolly. And with inexperienced cornerbacks and the lack of a free safety with enough range to help out, Rivera's only choice was to play Cover 3. 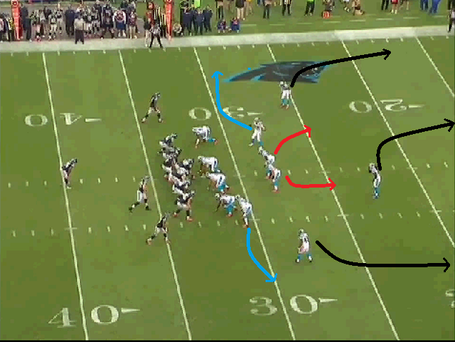 In that last month, the Panthers were in Cover 3 for about two-thirds of first-down plays and had eight defenders in the box on over 80 percent of those plays. If the offense got a decent chunk of yards and found itself in a second-and-medium or -short situation, the Panthers would apply the same strategy. On passing downs, the Panthers would turn to Cover 2 or, in long passing downs or facing a two-minute offense, Cover 4 with the occasional zone blitz thrown in. 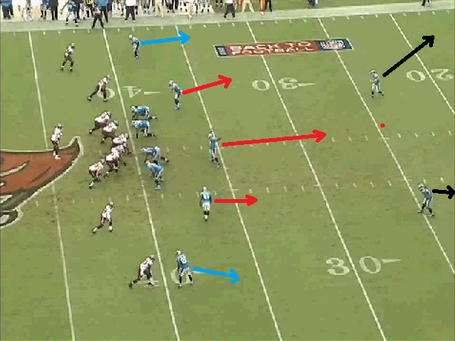 While the simplistic strategy gave the Panthers the best chance of stopping the run, it did put the secondary in a tough spot. Charles Godfrey, the team's best tackling safety, was forced to switch to strong safety to play in the box; Haruki Nakamura was given the important task of manning the deep middle of the field, a job that requires good instincts and great speed -- neither of which he possesses; and Josh Norman, a big man by cornerback standards, had to play soft coverage instead of a pressing game that would have suited him better.

In order to help out his outmatched secondary, Rivera started to adapt to what the offenses were doing -- something he never had to do with the star-laden defenses he coached in Chicago and San Diego. In 2011, the Panthers played their base 4-3 defense against offenses in 11 personnel (1 RB, 1 TE, 3 WRs) 33.5 percent of the time, the most in the league by about 6 percent, according to Football Outsiders. Last season, Rivera sent out his base defense only 4.3 percent of the time against those three receiver sets, opting for more defensive backs to help out against the pass. In fact, Carolina played with five defensive backs on more than half its plays in 2012.

The Cover 3 defense is good for stopping the run and guarding against the deep pass; but it has its weaknesses, the biggest of those being the quick passing game. 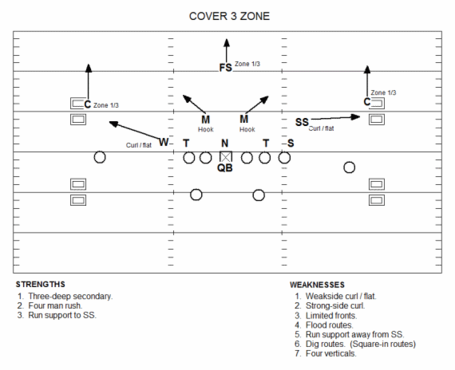 With the corners in soft coverage and the contain players (the weak side linebacker and the strong safety) looking run first before shooting out to the flats, wide receivers can run quick outs and hitches all day long for decent gains. Take a look at the following GIF of the defense's first play last season.

Talk about a tone-setter. Offenses ran those routes about a billion times against the Panthers in 2012.

When the quarterback is getting the ball out that quick, those two monsters the Panthers have at defensive end don't have enough time to beat their blockers. That Greg Hardy and Charles Johnson were both able to get to double digit sacks last season was a minor miracle considering how much time the Panthers spent in Cover 3.

I went back and reviewed all 39 sacks the Panthers tallied last season, and, from a schematic standpoint, the results were not surprising:

The majority of sacks came with the Panthers in man-to-man or with two safeties deep. Only seven came in a Cover 3 defense, Carolina's most commonly played defense. And look at the time of those sacks. The average Cover 3 sack took 2.86 seconds compared to a 3.22 second average for other defenses*. In order for a Panthers rusher to bring the quarterback down in a Cover 3 scheme, he had to be lightening fast. In a Cover 2 or man-to-man defense, those quick passes aren't available, so the rush is afforded some more time.

*When taking the time of the sacks, I stopped the clock at the beginning of the sack process rather than when the QB was brought to the ground.

If you want to take a look for yourself, click here for the play log of every sack and here's a cut-up of all 39 of the Panthers sacks in 2012:

Going into the 2013 season, Rivera has more pieces to work with thanks to the team's first-round pick, defensive tackle Star Lotulelei. If the former Utah standout can be the run-stopper scouts project him to be, and the Panthers don't need to play eight in the box to stop the run, the ripple effects will be huge.

Godfrey and whoever wins the other safety job can split the field in two deep and won't have to cover as much ground; the Panthers' big corners can take advantage of their size and press opposing wide outs; the linebackers can patrol the middle of the field and hit anything that come their way (a specialty of theirs); and the pass rush will have more time to get sacks with the quarterback's quick options taken away.

If all of that comes to fruition, the team's off-season chatter may become a regular season reality.