The inverted bone formation was a complete success last season. Will it warrant increased usage in 2013?

Share All sharing options for: Carolina's Tyrfing: the Inverted Bone

Admittedly I'm not as familiar with mythological swords as I should be. But thanks to Wikipedia's page on mythological objects, I was able to glean enough knowledge to make an informed decision on the titling of this article.

Based in Norse mythology, Tyrfing was the magical sword of Svafrlami, (the king of Gardariki, and the grandson of Odin) forged by a couple of dwarves. Per Wikipedia:

Then [Svafrlami] forced [the dwarves] to forge a sword with a golden hilt that would never miss a stroke, would never rust and would cut through stone and iron as easily as through clothes.

Of course not every team in the NFL may possess a mythical sword, otherwise they wouldn't be very mythical. One of the lucky few, the Panthers have their own mythical sword: the 31 personnel grouping (3 RB's, 1 TE), inverted bone formation, which, in the past, I've dubbed the inverted T formation. 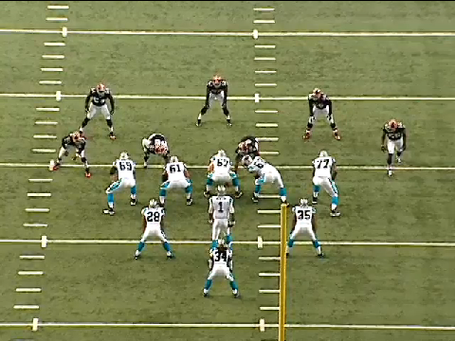 Here is a chronology of the plays called:

Only utilized three times in the first thirteen weeks of the season, ex-OC Chudzinski increased the usage of the Panthers 31 personnel set during the last quarter of the 2012 season.

The most germane play in the inverted bone arsenal would be the Panthers rendition of the triple option. 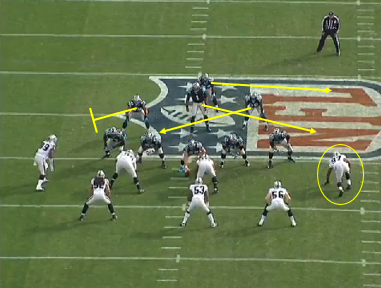 From my piece on the read option:

If [the read player] collapses the mesh, or encroaches on the running lane, the QB will keep the ball and proceed outside. Once outside, the QB will run until a defender picks him up; if applicable, the QB will then pitch the ball to the pitchman.

In the play versus Oakland, the circled defender, #97 is the read player. 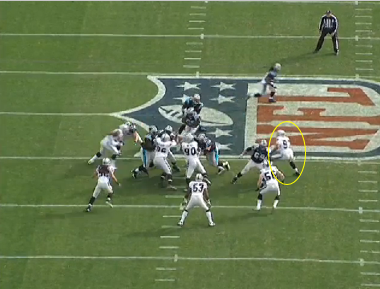 One advantage found in the inverted bone, with the backside back, in this play Richie Brockel, kicking out the backside DE, the RT is freed up to double the defensive tackle. The read defender moves inward, prompting Newton to keep the ball. 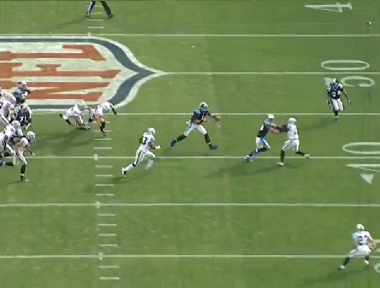 Newton makes it into the open field and pitches the ball to DeAngelo Williams as the Raiders MLB gets an angle on him. 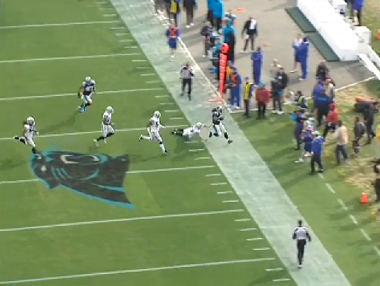 Williams is run out of bounds after a gain of 16 yards.

By and large, it's not the run game which provides the biggest plays, but rather the passing game.

Another excerpt from the read option article:

Maybe the biggest plus for the zone read option plays is the mental pressure they put on a defense. The danger presented by the read option forces opposing defenses to spend time preparing for it. [...]

When the defense is afraid of the zone read option, they compensate for it, either consciously, or subconsciously, which opens up prime opportunities for play-action passing; something that Coach Chudzinski did not ignore.

31 personnel is a run heavy set, and in the inverted bone, hints towards the triple option. Naturally, defenses compensate.

Here is one of the pass plays, versus Atlanta, Week 14. 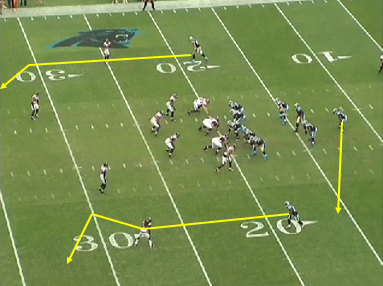 This is Carolina's bread and butter pass play from the inverted bone. Conceptually, the routes are deep, designed to play off of the spacing of the defense, giving the receivers, Steve Smith and Greg Olsen, advantageous matchups, and maximizing the big play potential.

When defending against the option, many teams decide to play some sort of man defense against the potential ballcarriers. In this case, the erect DE, John Abraham is responsible for QB Cam Newton, the ROLB is responsible for the diveman, Mike Tolbert, and the Strong Safety takes the pitchman, DeAngelo Williams. That's all well and good when the offense actually runs the triple option, but if they opt to pass the ball, the situation takes an unfortunate turn for the defense. 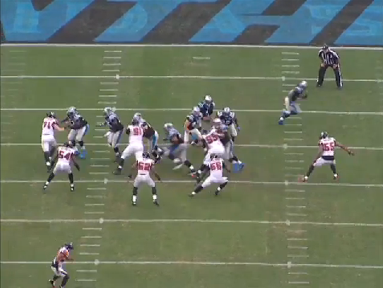 The LB's, and Abraham for that matter, are initially fooled by the play-action fake, and hesitate before dropping into coverage. 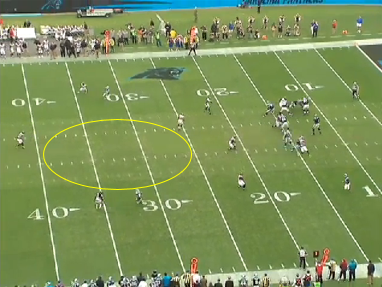 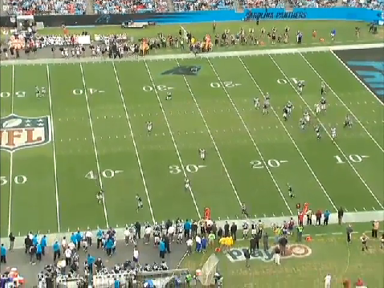 The FS shifts over to Olsen's deep post route, while Smith, who usually runs a 9 route, adjusts to the coverage and generates great separation on his 7 route, making the catch for a gain of 16 yards.

In the third quarter the Panthers again lined up in the inverted bone formation for another passing play. 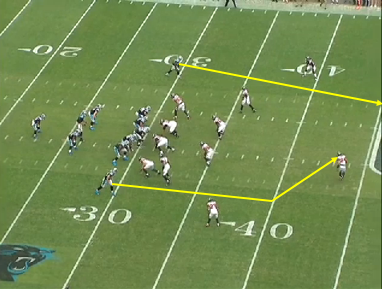 This go around has the SS drop into the box. Smith will run a 9 route at an angle to get inside of Asante Samuel's zone coverage, while Olsen will again run the deep post route, taking advantage of the dearth of defenders over the middle of the field. 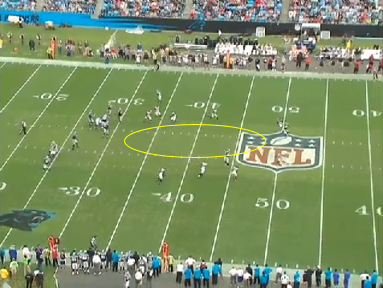 Cam Newton only has to read the FS, who shifts overtop Smith's 9 route, to turn to Olsen, who has beaten the CB, and make the throw. Olsen makes the grab and is tackled after an 18 yard gain. 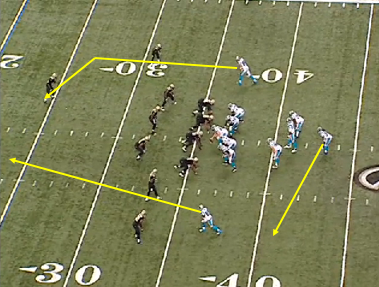 New Orleans takes it to the next level as S Roman Harper creeps all the way to the LOS, leaving Smith alone with CB Patrick Robinson. 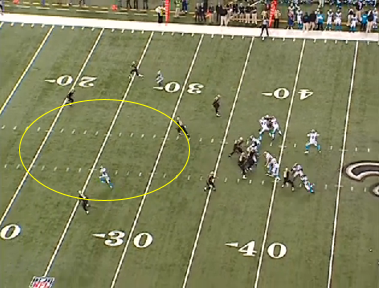 With Harper covering the checkdown, Williams, and the FS overtop Olsen, Smith has no trouble beating the NO coverage. Again, there is a lot of open space in the middle of the field. 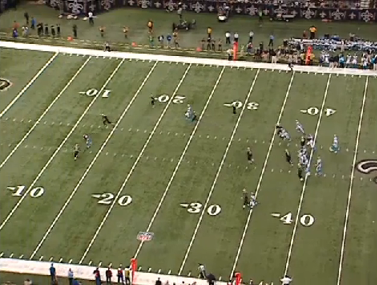 Newton hits Smith, who is taken down at the Saints 5 yard line, a gain of 31 yards.

Of course there is no guarantee that the Panthers will cash in on every play from the inverted bone moving forward, but I think it's fair to assume that Mike Shula and the Panthers Offensive Coaching Staff will further develop their 31 personnel playbook, expanding from the existing 1-2 passing plays and 1-2 running plays. I would postulate that we see an increase of usage next year. That doesn't mean we'll see 50+ plays from 31 personnel, but it wouldn't be surprising to see regular use of the inverted bone formation next season.