In respect to the legends: Sonny Jurgensen

Looking over some the more underrated passers from one of the stingiest eras in NFL history.

Share All sharing options for: In respect to the legends: Sonny Jurgensen

The dividing moment in this history is the invention of defensive pass interference, which occurred after the conclusion of the 1977 season.

Due to the low-scores of games, and in an attempt to encourage more passing, the league amended the rulebook to place more restrictions on defensive backs. In the infancy of the live ball era, offensive schemes such as the West Coast Offense and the Air Coryell were spawned.

In the parthenon of QB's, much of the recognition and decoration goes to modern passers, the likes of Dan Marino, Joe Montana, Peyton Manning, etc. However, little remembrance is afforded to the 'dead ball passers', those who blazed the trail for the Favre's, the Aikman's, and the Elway's.

Here's a look at one of the great dead ball quarterbacks, and what lessons his game can impart to our own savant, Cam Newton.

Sonny Jurgensen, grew up in Wilmington, North Carolina, and played his college football at Duke. Despite a peculiar throwing motion, Jurgensen was the most accurate passer of his time.

Drafted by the Philadelphia Eagles in fourth round of the 1957 NFL Draft, Jurgensen was slated to sit behind legend Norm Van Brocklin (another dead ball legend in his own right) for much of his early career. With an unorthodox throwing motion, and his pudgy stature (Jurgensen is 5'11" 202 lbs. per Pro Football Reference), Jurgensen did not engender much confidence from spectators and coaches during the early epoch of his 18 year career. However, Van Brocklin would retire after winning the 1960 NFL Championship, leaving the reigns to Jurgensen.

In almost every essence of the word, Sonny Jurgensen was a gunslinger. When necessary, Jurgensen completed passes left-handed, underhanded, and even behind his back.

During the 1961 season, Jurgensen would set the NFL record for most passing yards in a season with 3,723 yards, tie the record for most TD passes at 32, and achieve a staggering 8.9 yards per attempt (YPA), all with a respectable 56.5% completion percentage. 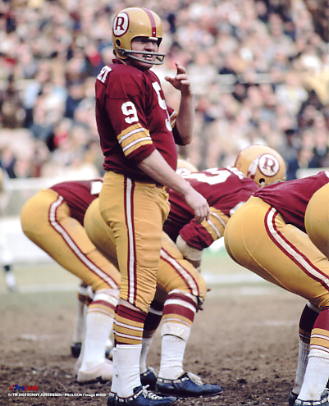 Jurgensen would play marvelously for Washington, and in the span of six years, was selected to four All-Pro teams.

Coaching instability would also plague Jurgensen's time in Washington; Sonny would play under 9 different coaches during his career.

"He hangs in there under adverse conditions. He may be the best the league has ever seen. He is the best I have seen."

Tragically, Lombardi would die of cancer before the 1970 season.

Two years later the Redskins would hire another hire profile head coach, George Allen (think John Fox before John Fox). Allen, the conservatively natured defensive head coach, did not mesh well with the gunslinging Jurgensen. After incurring a shoulder injury during a preseason exhibition, Jurgensen would lose the starting job to Billy Kilmer.

Jurgensen would see sporadic action over the next few seasons before concluding his career after the 1974 season, in which Jurgensen saw four starts as a forty-year old QB.

At the time of his retirement, Jurgensen's stat line would read as one of the greatest QB's of all time: 32,224 passing yards, 225 TD passes, 189 interceptions, 57.1% completion percentage, and 7.6 YPA. All achieved in 149 starts. For not winning a Super Bowl, Jurgensen has largely faded out of public memory, however, for nearly two decades, he was one of, if not the best pocket passers in the NFL.

Bringing it back to the present:

Sonny Jurgensen had one of the great arms of his era, and was the most accurate passer in the NFL during his career. He played the game his way; for much of his career Jurgensen called his own plays, keeping his team in games, despite Washington's mediocre defense.

One of Cam Newton's biggest problems is his accuracy: if Cam can improve the consistency of his footwork, he will be able to complete more of his passes.

I also feel that Cam needs to let the game come to him. Like Jurgensen, don't force the issue; don't fixate on a certain matchup, or read. If the play isn't there, don't force it.

"All I ask of my blockers is four seconds," the veteran quarterback once explained. "I try to stay on my feet and not be forced out of the pocket."

Additionally, Jurgensen was well respected for his ability to deliver a perfect strike in face of the pass rush. Tying in with with the above point, Cam needs to know when to back off and hit his hot route or checkdown. On more than a few occasions last season, the opposing team would show blitz, overwhelming the protection scheme, while Newton held on to the ball for more seconds than he actually had. Cam needs to see the blitz, and be ready to find his 'hot receiver'.

In all likelihood, as the game slows down for Newton, this will all fall in place, provided he receives proper coaching, and is surrounded by the correct pieces.