Breaking down the data: Panthers vs. Vikings

The Panthers were able to exert their will over Minnesota.

Share All sharing options for: Breaking down the data: Panthers vs. Vikings

Against Arizona the Panthers offense was under siege in the second half. As a result they couldn't muster up 100 yards of offense, nor any points on the scoreboard.

What changed from the Panthers point of view? Per Pro Football Focus, Cam Newton only found himself under pressure on eight of 29 drop-backs. The offensive line as a unit played a fantastic game, keeping DE's Jared Allen and Brian Robison quiet, and not faltering under the strain of additional rushers. Similarly, Newton was comparatively decisive when faced with the blitz.

Working symbiotically, the Offense was able to help keep Adrian Peterson under wraps. In putting up touchdowns, Carolina forced the Vikings to abandon the running game, while the Panthers front seven was able to hold Peterson to 62-yards rushing, his season low.

This week we saw the Panthers explore different avenues with their 11 personnel group, some of which had been seen previously, some not. Even with the game well in hand, Carolina stuck with 11 personnel.

Not 31 personnel, Coach Shula called one pass from 30 personnel, resulting in an incompletion. Carolina has expanded its inverted bone/diamond formation playbook this year, but we have not yet seen significant usage thus far.

The past couple of weeks we've seen the Panthers employ empty-back formations to combat the blitz and spread out the defense, usually motioning out RB's Williams and Tolbert from the backfield to the slot or out wide. This week there was one play in the second quarter from 02 personnel, with Brandon Williams split out wide, Olsen in the slot.

A role he's reprised before, WR Brandon Lafell saw time aligned in the backfield in the Panthers pistol formations, even participating, and receiving the pitch, in one triple option play, gaining nine-yards. In all the read option had another substandard week, gaining 23-yards on six carries, though if you remove an Everson Griffin blown-up inverted veer, the total is more palatable at five carries for 28 yards. This has been the least amount of read option Shula has called this season, which is somewhat surprising, considering Carolina's use of 11 personnel.

As you might expect, 22 personnel was boosted in garbage time, when Derek Anderson took the helm.

Minnesota made a lot of use of heavy personnel groups, until the second half, when they had to 'air it out'. In totality, Minnesota called just 11 run plays in contrast to 48 pass plays. The reigning MVP, the Panthers did a fantastic job of taking Adrian Peterson out of the game, especially in the second half, limiting him to just 10 carries. There was also one look at the 2-4-5.

Unlike Arizona last week, the Vikings were running against Carolina's 4-3, and largely passing against the nickel set. Here's a look at the pass coverage chart.

Last week Arizona ground the Panthers offense to a standstill with withering pressure, primarily from blitzes. Minnesota did not blitz quite as often. The Vikings did blitz with their linebackers, but they weren't nearly as successful as the Cardinals. Minnesota doesn't have a Daryl Washington, or Karlos Dansby, a dynamic pass rusher in the linebacking corps; the Panthers pass protections stood up well against the Viking pressure, and QB Cam Newton was able to find open targets. 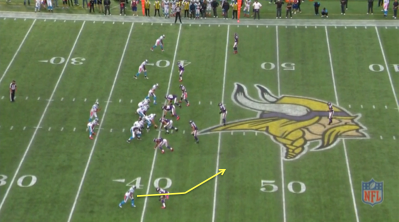 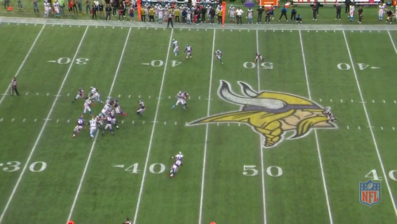 The blitzing LB leaves no underneath coverage, and Smith easily achieves inside leverage against Rhodes. With the pressure closing in, Newton makes the throw. 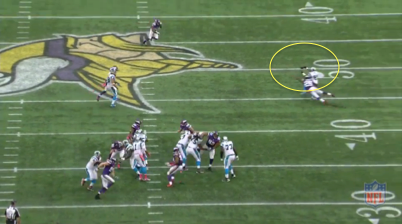 Newton places the ball in the perfect spot, ensuring that only Smith may catch the pass, as the wily veteran does, moving the chains.

The protection schemes held up much better against the Viking pressures, but Newton was also markedly more decisive when faced with pressure.

A less heralded munition in Carolina's defense, with the astounding successes of the front four, has been DC Sean McDermott's blitzes. With the front four held in relative check by Minnesota's fairly talented offensive line, McDermott was able to harry Matt Cassel with well designed blitzes. 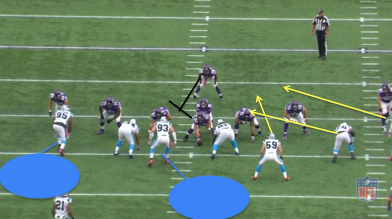 Here Carolina masks their planned pressure. With Chase Blackburn showing blitz, RB Adrian Peterson is assigned to pickup the LB. Pre-snap, the Minnesota protection scheme is also shifted towards our left, with RT Phil Loadholt tasked to block Charles Johnson, who, like Blackburn, will drop into coverage. Meanwhile, Thomas Davis, not visible at this moment, appears to be in man coverage against the Vikings TE. Greg Hardy will push inwards towards the interior linemen, hoping to open up real estate for Kuechly's and Davis' rushes. 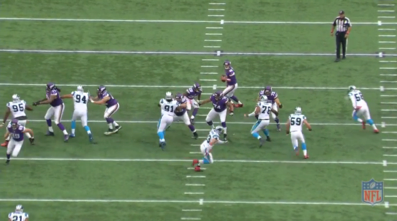 At the snap Loadholt is left without anyone to block. Peterson moves to close the space with Blackburn before realizing that the LB isn't rushing the passer on this play. Successful in his endeavor, Hardy draws LT Matt Kalil inwards. Due to his explosion, Thomas Davis is left unblocked, as with the angle, there is no way Peterson can recover to slow down the former Bulldog, with Kuechly coming the edge as well. 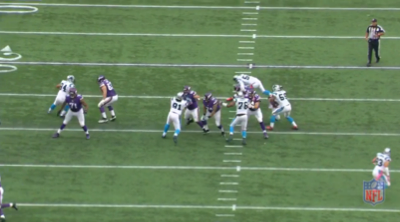 Matt Cassel waves the metaphorical white flag, going to a knee as Davis touches him down for the sack. This is when I imagine McDermott twirling his invisible mustache, snickering.

One of the original propagators of the read option in the NFL, the Panthers are not loathsome to experimenting further with the different possibilities presented with the basic read option. Mike Tolbert's shovel pass touchdown reception was actually a variation of the triple option. 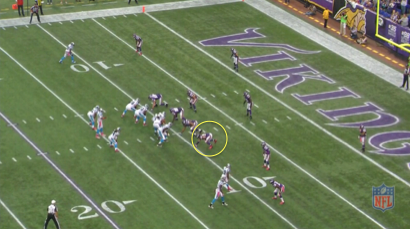 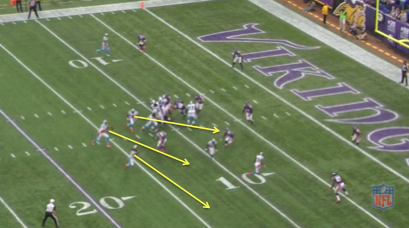 Rolling right Newton, has the option to keep the ball, shovel pass the ball to the dive man, Tolbert, or pitch it to the Williams, depending on Robison's actions. 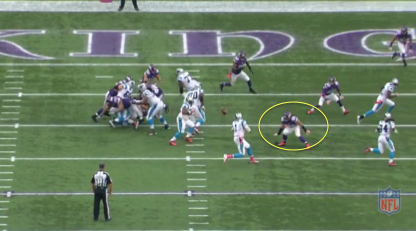 The Viking pass rusher moves to cover Newton, creating a very wide alley; Newton passes it to Tolbert who follows LG Travelle Wharton's pulling block, and much credit to him, breaks four tackles on his way to the end zone. In a word, I thought this play was neat.