Will Hue be the New OC? Many are hoping so, and Swamp has the mini-scoop - Otto Greule Jr 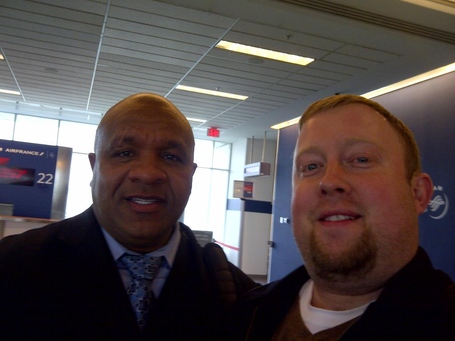 So earlier today I was sitting in the Charlotte Douglas International Airport waiting for my 1:50 pm flight to Cincinnati, OH. As usual, I was scrolling through the comments on Cat Scratch Reader which is my go-to boredom-buster while travelling. Between the discussions on whether or not to keep which RB I looked up and a person caught my eye. I knew I recognized him from somewhere, and as I noticed the Cincinnati Bengals logo on his bag and remembered an article from James Dator last week about an upcoming interview it dawned on me that I was sitting across from quite possibly our next Offensive Coordinator, Hue Jackson.

Of course the first thought that crossed my mind was did he get the job? Then I wondered if I had anything for him to autograph. In the end, I figured it would be best to ask him how the interview went, wish him good luck and try not to bother him. I imagine fans like me could get on a player/coach's nerves pretty quick pumping them for information and wanting to discuss subjects that they knew infinitely more about than me. So I sat there for the next 45 minutes as he went from phone call to phone call trying not to look like a creeper and waiting for my chance to interject. Finally about 10 minutes before we boarded I saw my chance.

"Mr. Jackson?" I asked, to get his attention. He looked away from his phone and I awkwardly told him "There are alot of people in Carolina, myself included, that hope you're our next Offensive Coordinator." He smiled and said "Well thank you, I hope so too!" And before I could ask he added "the interview went really well." Thinking through this, I doubt seriously he would've told me if the interview did not go well but as he volunteered that information without me asking I'm going to take that to mean he was satisfied or even excited how the interview went. I replied "that's awesome; I know you're excited about having a weapon like Cam Newton. I jumped the shark here and should have said "about the possibility of having" but he didn't correct me. He simply said "Yes, he's a very special player."

We boarded the plane and I sat there thinking about the other questions I should have I asked. It occurred to me that just like when my nephews and I ran into Greg Hardy and Charles Johnson on the same night at South Park mall I could say it all I wanted but at the end of the day pics or it didn't happen. If you missed those pictures they are at the bottom of the article. When we landed in Cincinnati I waited for him to get off the plane, asked if he had time for a picture which he happily agreed to, I wished him good luck and off he went.

It was a pretty cool experience and one I wanted to make sure I shared with my fellow die-hard Panther fans. I'm hoping I was lucky enough to have met our future Offensive Coordinator today. 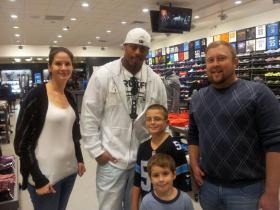 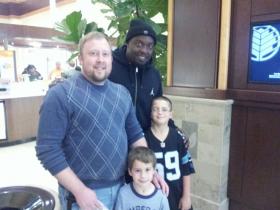