Welcome to another edition of Panther Paw Prints, where we take a closer look at what others are saying about our Carolina Panthers on the interwebs. As a forewarning, I will go ahead and tell you that this edition of Paw Prints isn't going to be very positive, so if you're looking for some fluff pieces to stroke your fan-hood ego then you might want to skip this one. 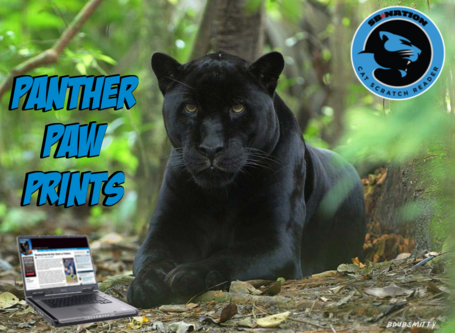 Now that we've got that out of the way, on to the Paw Prints...

It might be a long time before the NFL Network brings its cameras and production trucks back to Charlotte.

The Panthers proved they’re not yet ready for prime time Thursday in a 36-7 loss to the reigning Super Bowl-champion New York Giants in front of a near-capacity crowd at Bank of America Stadium.

We might as well start with the obvious one. It's no secret that the Panthers played like a JV team who didn't belong on the same field as the G-Men last Thursday, and if that's the kind of effort they're going to produce when the bright lights of prime time are on, we can't expect to get the call from NFL Network any time soon.

Follow me after the jump for the rest of the Paw Prints...

We already know that Cam Newton had a bad game on Thursday, but it could have been worse. If not for his touchdown run late in the 3rd quarter, it would have been only the second time in his young career that he didn't produce a single touchdown. (Coincidentally, the game he didn't produce a touchdown was the Titans game from last year, which most agree is what this debacle against the Giants most resembled.)

Newton didn't have any touchdown passes for the first time this season Thursday night, something that happened three times last year. But he avoided what would have been only his second pro game without a touchdown at all by scoring on a one-yard run in the third quarter.

There's really no analysis to go with it. Cam was bad and it's just a fact that we're going to have to face - when he plays bad the rest of the country is going to take notice, and the majority of sportswriters are going to point out that he played bad. The only thing we can really do is take our lumps and patiently wait for the wave of criticisms to pass.

Moving on, these next two Paw Prints deal with our quarterback who - as we've already discussed amongst ourselves - didn't show the kind of leadership that we expect from a franchise player. And, as we already know, he was called out on his lack of leadership from veteran WR Steve Smith, who explained to the media that his disappointment wasn't in the fact that Cam had a bad game, but rather his lack of maturity on the sideline when things weren't going so well.

"I don't want to be passive and not do it because if I don't do it, who will?" Smith said. "The same way with my son; I can't expect somebody else (to do that). So, yeah, I lit into him because I thought it was an opportunity for him to see and understand what was going on. This is more than about playing football. It's about becoming a man and understanding what this is."

We've seen the story already, but it's nice to see Smitty explain where he was coming from instead of just saying that it was between him and Cam. I'm sure we'll never hear an exact account of what was said (mainly because Smith admitted that there were "unchoice" words), but it's still nice to see the reasoning behind Smith's displeasure.

Pat Yasinskas of ESPN's NFC South Blog chimes in on the situation, and like many of us - approves of Smith's handling of the situation:

But this situation was different on many levels. In this case, there’s nothing wrong with Smith getting a little vocal with Newton. The quarterback looks up to the receiver, and that’s a good thing. Smith was simply pointing out to Newton that he should still be taking mental reps, even though he was out of the game.

I agree with Pat Y here. Someone had to stand up and be the one to let Cam know his behavior was uncalled for. I'm glad it was someone like Smith, a player who's never really been a vocal "leader" type before. Last season, Ryan Kalil and Jordan Gross were the ones to have the discussion with Newton, so hopefully this tongue lashing from Smith will be the one that finally gets to Cam.

While it's easy to pile on the quarterback because he's the most important player on the field, Newton certainly wasnt' the only Panther who deserved blame for the loss on Thursday. The kick return game was atrocious, as rookie Joe Adams had two critical fumbles that sapped the momentum from the Panthers and gave it right back to New York.

Because of Adams' two fumbles, fans are now calling for a change at the kick/punt return position. (Of course, some fans have been calling from a change ever since his name was called on draft day, but this time the calls have some merit behind them.) As to whether or not the coaching staff will make a change; right now it's being taken into consideration:

Coach Ron Rivera vowed after the game that he and his staff will take a close look at the kick returner position before making a move.

"It was disappointing for Joe. He has struggled. You take a look at the tape and you see he had opportunities to make plays and he didn’t," Rivera said. "He’s going to have to learn, and learn from these mistakes. And there’s a point where we can’t tolerate those and we’re going to have to make decisions.

"But until then, he’s still our return guy. We’re going through the process with everybody."

I don't really have a dog in the fight, but I just hope they don't make a rash decision without carefully examining all angles, and it appears they're going to take their time and evaluate the situation before making a change. However, I'm still puzzled as to why they changed from Pilares to Adams on kick returns in the first place. Perhaps now they'll put the Flyin' Hawaiian back on kick returns to see if that solves the problem, because I don't know if we have anyone else on the roster who has the experience or tools to be the kick returner.

I know some of you are probably thinking of Armanti Edwards, but if they're going to put him back on returns it would be more prudent to put him in as the punt returner where he has more experience, as he has only 4 KO returns in his career, averaging 14 yards per return.

Our last Paw Print is certain to depress you, so click on it with caution. Joe Person hands out grades for the Panthers from the 36-7 drubbing at the hand of Eli and the Giants, and none of the grades are pretty. I'm linking the three worst grades: for Quarterback, Special Teams, and Coaching; simply because I feel those three areas are the reasons we were embarrassed on Thursday night.

F QUARTERBACK: Cam Newton had the worst game of his career, at least as far as passer rating. His 40.6 rating was lower than his 44.6 mark last season at Atlanta. Newton completed 16 of 30 passes for 242 yards, but he was intercepted three times. Newton faced heavy pressure, but he was bad even when he had time.

F SPECIAL TEAMS: Not sure why Joe Adams still is returning kicks. The Panthers drafted him as a punt returner, yet they keep using him on kicks despite little to show for his work. Adams lost two second-half fumbles (one on a punt) and averaged 20.4 yards per kick return.

F COACHING: Big game, coming off a big win against the Saints. And a big disappointment. Ron Rivera said the Panthers were out-coached and out-played. But Rivera said he won’t hit a panic button. It will get no easier Sept. 30 at Atlanta.

Yep, all F's. And they deserved F minuses, if such a thing existed - it was that bad.

When your quarterback, special teams, and coaching staff all deserve F's for their lackluster performances; you're probably not going to win very many games, and Thursday's disaster is proof of that.

That's it for this edition of Panther Paw Prints. If you have any further analysis you'd like to add to these topics, feel free to do so in the comment thread. Let's hear what you've got to say, Panthers Nation!