Breaking Down the Data: Giants vs. Panthers

Share All sharing options for: Breaking Down the Data: Giants vs. Panthers

Coming off a successful fight against the New Orleans Saints last Sunday, the Panthers hosted the 1-1 New York Giants for NFL Network's Thursday Night Football Game. The atmosphere in and around Bank of America Stadium was awesome leading up to kickoff. In contrast to the Saints game, the weather was delightful, and the setting sun provided a incredible vista. However once the gameday festivities commenced, the night soon turned repugnant for Panthers fans.

With only two days to install a gameplan, the coaching staff was really limited in their options. In the NFL, Monday is a universal off-day for a majority of players. Tuesday is when teams review their own film, as well as that of their opponents. On a normal week, practice doesn't commence until Wednesday, however, this being a Thursday Night Game, Wednesday was used as a walkthrough for the players. So with what amounted to a film session and a walkthrough, the Panthers walked into a nationally televised game against the defending Superbowl Champion New York Giants.

However, none of this excuses the Panthers from the performance we saw on Thursday. The team was not mentally focused, lacked fundamentals, and in some facets, was overwhelmed by the Giants.

Believe it or not, the offensive gameplan was relatively balanced, with only the final two drives exacerbating instability. And despite appearances, the Panthers Defense did make halftime adjustments.

Despite the circumstances, the Panthers maintained a remarkably balanced attack, until the late 3rd/4th quarter, in which the Panthers passed the ball on the final 18 plays.

This stat was heavily skewed: the final 13 plays the Panthers ran pass plays out of 11 personnel.

Instead of the I formation that we saw in the preseason, the Panthers have primarily operated out of a new formation. Cam lines up in the shotgun, with Tolbert to his immediate left of right, and DeAngelo Williams directly behind him. Out of this formation the Panthers have primarily been running the read option. However, perhaps in hope of catching the Giants creeping into the box, the Panthers passed the ball out of this formation, which I believe is the Buckeye Pistol. (I've just been calling it bone, mostly because bone sounds cool).

This is the package in which Kealoha Pilares sees a majority of his playing time; either lining up as a RB, or motioning out as a WR, and running a route. When utilized properly, I think this personnel grouping could be deadly for opposing defenses.

-On the first play of the game, the Panthers lined up in 22 personnel Wildcat, with Williams receiving the snap. And on the lone touchdown, the Panthers were aligned in 23 personnel.

-After achieving a first down, the Offense had 14 pass plays and 6 run plays. 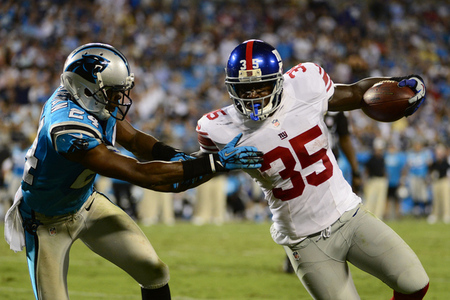 -The Defense was on the field for 68 plays.

This was largely due to the fact that the Giants really only used 2 WR's for the majority of the game, opting instead to play Henry Hynoski at FB, giving Eli a safety blanket on each play.

-On two occasions the Panthers attempted to fend the Giants off with a 5-3 goal line defense.

-Primarily the Panthers played in their base defenses on first and second down, chiefly opting for the nickel on third downs.

As I noted above, the Panthers had limited time to prepare a gameplan for this game. Unable to incorporate anything new into the playbook, the Panthers had to rely on their previous gameplans. In an given week an offense goes into a game with approximately 30-40 plays in their playbook, divided by down & distance and other mitigating factors. With only two days of preparation, the Offensive Coaching Staff either recycled a gameplan from Weeks 1 or 2, or created an amalgam of which plays the players were most knowledgable. And when the game turned south, Chud would not have been able to facilitate any major changes, at the risk of confusing his players, or having someone not know their assignment, either of which could have been catastrophic.

In my opinion, the read option did not have much success due to the athleticism of the Giants front four. Rather than having to read a 320 lbs. 1 technique, Cam had to read a 270 lbs. 7 technique, who was almost equally athletic as Cam. Combine that with the relative ease with which the Giants front four handled the Panthers O-Line, and it is easy to see why the option and the running game struggled as it did. In a similar move, the Giants also occasionally dropped one of their DE's to spy on Cam, and to contain his escapability. The Giants played a lot of Cover 2 so as to take away the deep passing game; this opened up curl routes and crossing/out routes. The Panthers also had success using the skinny post in the slot.

The Panthers also wished to neutralize their opponents deep passing game. For much of the game the Panthers shaded a Free Safety overtop Victor Cruz. However, Eli Manning and the seasoned Giants WR's immediately took note of this, and used slant routes to push the Panthers LB's off the LOS, and the Safeties closer to the box. Once achieved, the Giants began using post routes to take advantage of the Panthers use of Cover 1. With one safety over top Cruz, and another inside the box, Ramses Barden was able to beat Josh Norman with relative ease. Norman was slow to break on the ball, and struggled to deal with the height/speed/strength of Barden.

In my the estimation, the Panthers blitzed more in the first half of this game, than they have in any other half this season. Most of these blitzes were with 5 rushers; however, the Panthers could not generate pressure with the front four, or with a blitz. In the second half there was significantly less blitzing, but with similar results. The Panthers primarily played zone coverage as well, however, the coaching staff made the switch to man coverage in the second half.

Looking To Next Week:

Atlanta is one of the most talented teams we will play this season. I don't think the Defensive Coaching Staff will risk single man coverage against Julio Jones, Roddy White, and the venerable Tony Gonzalez. However, I expect to see some blitzing to take advantage of a weaker Atlanta O-Line. Unlike the past three games, I expect we will see a heavy helping of Cover 2 and Cover 3. However, watch out for Jacquizz Rodgers on screens and checkdown passes; none of our LB's can keep up with him.

Offensively, once again, I think we will look to re-establish the running game early, opening up the middle of the field for more crossing routes, and seam routes for Greg Olsen.