Share All sharing options for: Cover One Robber: Luke Kuechly

Going into the Preseason, the Panthers Coaching Staff is working to implement their playbook into practice, and see which players are best suited to fill roles on the 2012 team, as well as which players can be trusted with burdensome assignments. One such player who has already stood out and demonstrated his mettle is LB Luke Kuechly. So far, the Panthers' 2012 first round pick has exhibited the instinctual intelligence and coverage abilities that were lauded at Boston College.

Kuechly should provide an instant talent infusion to the Panthers Defense, and his many talents could put him into a position to succeed right away in a variety of situations.

As the game of football evolves, more and more teams are transitioning into pass first teams, utilizing spread formations. As such, Defenses have had to develop alignments and coverages that can withstand the evolved passing attacks. One coverage that has resulted in relative success has been Cover 1.

As its etymology suggests, Cover 1 involves a standard front, with one Safety up front, whilst the other Safety stays deep to cover any deep threats. This one Safety is responsible for covering the entire field, and is the last line of defense for the defense. The other DB's are tasked with man coverage. Depending on whether the offense is arrayed in an 11 personnel grouping, or a 12/21 grouping, the second safety is designated his target. If there is an extra TE (12 grouping), the Safety is placed on him, while if there are 3 WR's (11 grouping) the Safety is lined up against the slot WR Or, if the offense is aligned in a 21 grouping, the Safety lines up against the TE, freeing the Sam Backer for a blitz, or to spy on the FB/RB.

Meanwhile, the Front 7 is free to send up to 5-6 pass rushers on a blitz. Zone Blitzes are effective against a spread formation, as it's likely that the offense has minimum blockers in for protection. And if the blitzers are able to reach/disrupt the quarterback, they can prevent the offense from attempting a deep pass.

Even so, the Safety must be able to make decisions on the fly, and read the quarterback's intentions.

One variation of Cover 1 is Cover 1 Robber. Cover 1 Robber applies the same principles of Cover 1 with one minor hiccough. In the Cover 1 Robber, the Mike Linebacker drops back in coverage of the middle of the field. The Mike then assumes the role of the Robber, reading the QB's eyes and recognizing certain tendencies and sniffing out screen plays, play action, etc... The Robber then needs to act on what the QB gives him and under cut the intended receiver's route. The position requires a certain football intelligence and instinctual behavior. If the Robber is good enough at his job, he can prevent the offense from gaining significant yardage. 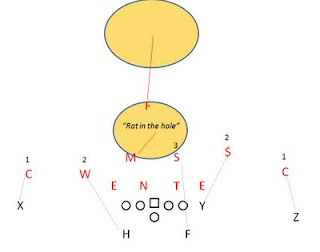 Luke Kuechly would be the perfect player to plug into the Robber role, as his intangibles allow him to cover a lot of ground, and as we've already seen, his football acumen gives him the ability to read routes as well as the quarterback's eyes.

Filling in the other roles, I'd put Sherrod Martin as the deep safety, with Charles Godfrey on the line, and Jon Beason at Will, with either James Anderson or Thomas Davis as the Sam. If necessary, one LB can always be sacrificed for a third corner as the defense maneuvers into a nickel formation to counter 4-5 WR alignments.