That's what most non-Panther fans would say if you said Chris Gamble's name. Because they don't know him, not many people do except for people who watch Panther games. He's not a guy who is going to lead the league in interceptions muiltple years (although he was third one year) and get hype, he is not a great cornerback on a large-market team. He is Chris Gamble, a great cornerback playing for our Carolina Panthers. 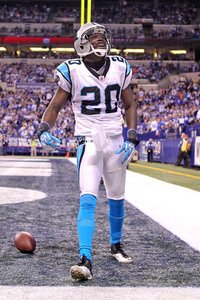 How often do you hear anyone from the media say Chris Gamble's name? Not very often. Chris Gamble is a top seven cornerback in the NFL, yet you never hear anyone say it. You hear about Darrelle Revis, Nnamdi Asomugha, Asante Samuel, Charles Woodson, and Patrick Peterson, but that's about it when it comes to cornerbacks.

They all but one play for big market teams, the one that doesn't returned four punts to the house (see the word four for each return), in his rookie season, Patrick Peterson. Revis deserves all the credit, he is the best cornerback in the league right now. Asomugha had an off-season, but is still top three without consideration. Samuel is a good cornerback, he deserves most of the attention. Woodson as well, even thought he plays more of a strong safety type spot rather than cornerback. Patrick Peterson deserves every bit of attention; if he was only a punt returner. But he plays cornerback too, poorly I might add, allowing the third most yards in the NFL. In his defense, he was targeted the fifth most times in the NFL.

BleacherReport's Matt Miller made a list of the top 100 CBs in the NFL, Chris Gamble comes in at #18. Behind the likes of Dunta Robinson, Brandon Carr, Charles Tillman, Richard Marshall, Ike Taylor, and Carlos Rogers

In ProFootballFocus' top 101 players in the NFL, Chris Gamble made the list at #101. Gamble was behind cornerbacks like Richard Sherman, Asante Samuel, Carlos Rogers, Brent Grimes, and Jonathan Joseph.

In last years Pro Bowl, Charles Woodson, Brandon Browner, Carlos Rogers, and Charles Tillman made the Pro Bowl over Gamble. Gamble deserves to be there, even though the Pro Bowl is a popularity contest that doesn't mean much to me.

Pat Yasinskas is ranking the top 25 players in the NFC South, and Chris Gamble missed the list. We will be seeing Jabari Greer and Brent Grimes on the list, but not Gamble (who came in at 26)

If he is any good, he can clearly be underrated from the above. But is he good? Find out why he is after the jump.

James Dator linked us to a FootballOutsiders article. That article tells us that Chris Gamble had the 5th best Success Rate (higher the number, the more passing attempts at that player that were not successful) in the NFL, at 66%. Gamble allowed a 6.2 yards per pass attempt and a 2.9 yards after catch average. Those are some pretty good numbers, but, as James points out, Gamble had a better Success Rate than Darrelle Revis. That's right, Chris Gamble, someone you never hear the ESPN or NFLN mention, had a better season than the most talked about cornerback in the NFL. Surprising, huh?

BW Smith wrote this article on Chris Gamble and Captain Munnerlyn, and how one (Gamble) rocked the NFL and one (Munnerlyn) was rocked by the NFL. Gamble allowed a reception every 18.1 coverage snaps. When quarterbacks threw to Gamble, they had a completion percentage of 45% and a passer rating of 53.3. Top five in both, behind Darrelle Revis, Ike Taylor, and Brent Grimes in completion percentage and behind only Revis and Asante Samuel in passer rating.

ProFootballFocus put Gamble at number 101 on their top 101 players of 2011. They said in that post that Gamble allowed 27 receptions for 338 receiving yards all season long. That's great numbers.

Tell someone who doesn't know Gamble, to just watch him play. Watch Chris Gamble play football, and you will see how good he is.

He is an excellent corner, no one can question that and say they've watched him.

Now, I've been talking about how good Gamble has been, but what about his help? Did he have a great pass rush, a good cornerback opposite of him, or really good safety help? No, Gamble didn't have any of that. 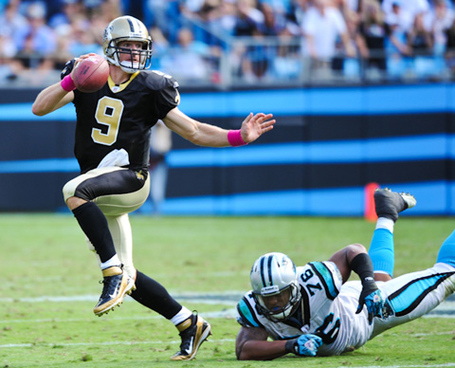 The Panthers pass rush in 2011 was very poor, Thomas Keiser, an undraftedrookie free agent, playing in eight games, was tied for second on the team in sacks with four. Our top sack getters in 2011:
Charles Johnson - 9
Greg Hardy - 4
Thomas Keiser - 4
Jason Shirley (no longer on team) - 2.5
Andre Neblett - 2.5
Antwan Applewhite - 2
and Captain Munnerlyn, our cornerback - 2

We totaled 31 sacks last year, seventh worst in the league. That number should improve next year, but that is not the point of this post.

Captain Munnerlyn didn't give Gamble much help. Having some of the worst numbers in the league last year. Munnerlyn getting stats like:

Well, no good pass rush or to help Gamble, what about safety help? Was there any?

Not really, our safeties played pretty bad last year, both of them. Sherrod Martin (82nd) and Charles Godfrey (77th) were both in the bottom twenty in tackling stats according to ProFootballFocus. According to PFF, safety was our biggest need this off-season. PFF also states that Godfrey had the highest yards yards per play by a safety in 2011. FootballOutsiders say Godfrey and Martin let up 23 tackles between the two.

Not many stats out there for the two of them, but most Panther fans know Martin was awful last year, and Godfrey was bad. As you probably remember, Martin, Godfrey, and Darius Butler all missed their tackles letting Reggie Wayne score a touchdown week 12 vs the Colts. The play was awful, Godfrey and Butler both miss the tackle, Wayne trots down field with Martin looking like he was afraid to hug Wayne, letting him get into the end-zone. 6.5% of plays in Carolina, the opposing team had a broken tackle.

CAUTION: You will remember just how bad our defense was last year by watching this video, watch at your own risk.

Chris Gamble had very little help, and he played like an Pro Bowler, and didn't make the Pro Bowl. If he was on the Packers or Patriots I guarantee Gamble would of been in the Pro Bowl last year.