Why Drafting Luke Kuechly Would be a Mistake

Share All sharing options for: Why Drafting Luke Kuechly Would be a Mistake

As April nears, Panthers Fans have found a new favorite for the 2012 NFL Draft: Linebacker out of Boston College, Luke Kuechly. Kuechly stands in at 6'3 242 pounds, a menacing statute to the paragon of a Linebacker. During his time at Boston College, Kuechly accrued 532 tackles, despite only playing three seasons for the Eagles. At the combine The BC LB displayed his intangibles, including a 4.56 40 yard dash, and a 10 foot broad jump. However, selecting Kuechly in the first round would be a mistake.

Kuechly may have sublime statistics, and solid measurables, however his position and his future standing on the team are not worthy of a top ten selection. It would befit the Panthers' Front Office to select a different player at a different position.

There are three main reasons as to why selecting Kuechly would be a bad move for the Panthers. Precedent, Cost-Benefit Analysis, and Impact. The selection of a Weakside Linebacker with the ninth overall pick fails to comply with these dictums.

Over the past decade, Rolando McClain, Aaron Curry, Keith Rivers, Jerod Mayo, Ernie Sims, and AJ Hawk have been selected in the top ten. However, only Mayo, and Hawk have even made a single Pro Bowl.

Rolando McClain was selected 8th overall by the Raiders in the 2010 NFL Draft, the move was a bit of a head scratcher, however, there was no denying that McClain was a superb prospect. Per CBSSports.com:

Excellent key-and-diagnose skills. Identifies the play quickly and has little to no wasted motion in getting to the action. Rarely fooled by misdirection. Recognizes screens quickly and attacks before linemen have a chance to set up blocks. Dedicated and he has to be kicked out of the film room. Prototypical size and strength for inside linebacker. Instinctive. Takes good angles to the ball. Good vision and balance to flow through the trash. Great strength in his hands to stack and shed blockers.

Insofar, McClain has amassed 59, and 72 Tackles respectively during the 2010 Season and 2011 Season in 29 career starts. While McClain has played in Oakland, the Raiders Defensive Line has been stellar, with Richard Seymour, Tommy Kelly, and John Henderson holding the point of attack.

Aaron Curry was picked by the Seahawks with the 4th overall pick in the 2009 NFL Draft. Coming into the '08 Draft, Curry was hailed as one of the best players in the Draft:

He was perhaps the best player in the draft, and Seattle got good value for him with the No. 4 overall pick. And Curry is a guy who will come in and contribute right away for Seattle, playing strong-side outside linebacker in Seattle's 4-3 scheme.rongly-built with long arms to keep himself off offensive linemen when playing against the run. Very smooth in pass drops, staying low in his backpedal and getting into depth at the proper angles. Good hands for the interception, and can break up passes using his hands or a big hit over the middle.

Curry disappointed in his first few seasons, ultimately falling out of favor with the coaching staff, resulting in his trade to the Oakland Raiders this past season. During his career, Curry has played behind a decent defensive line, including the likes of Chris Clemons, Brandon Mebane, Alan Branch, Red Bryant, as well as Patrick Kerney.

In 2008, the Patriots spent the 10th overall pick on Jerod Mayo, the Tennessee Volunteer Linebacker. Similarly, Mayo was highly touted entering the NFL Draft, capable of playing all three 4-3 LB spots, as well as an inside linebacker in the 3-4. As CBSSports.com documents...

Productive open-field tackler and playmaker who is a strong presence in the huddle, playing with good aggression taking on lead blockers … Plays with injuries that would sideline most (might need further medical review of his knee injuries) … Fluid moving down the line, showing the loose hips and lateral range to give long chase to the opposite end of the field … Naturally fast when playing downhill and has the foot quickness and flexibility to close on the play in a hurry

As an Inside Linebacker in the Patriots 3-4 Defense, Mayo has racked up sterling numbers, earning him a berth to the 2011 Pro Bowl. Playing in front of Mayo is the irrepressible Vince Wilfork, in tangent with Andre Carter's outside pass rush. 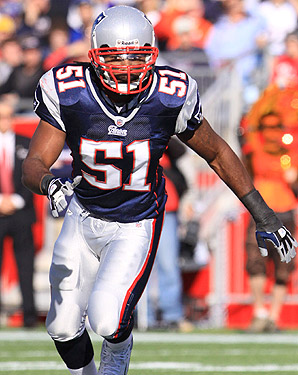 AJ Hawk was selected by the Green Bay Packers with the 5th pick in the 2006 NFL Draft. Hawk was viewed as one of the top Linebacking Prospects since Lavar Arrington, and as CBSSports.com enumerates,

Tough inside force vs. the run who moves well through traffic to locate the ball … Plays at a low pad level and uses his hands effectively to reroute the tight end … Has fluid and explosive range outside the box, using his hands to sift through traffic and generates the burst needed to play on the edge … Has excellent speed to close on the ball, demonstrating the balance and body control, along with quick feet to move down the line … Big hitter who will strike with force and has the strength to explode behind his tackles … Has the athletic agility, loose hips, valid speed and a strong desire to take on receivers in man coverage

Playing Inside Linebacker for the Packers, Hawk has played behind some skilled lineman, including BJ Raji, Cullen Jenkins, Clay Matthews, and Ryan Pickett, however, his stats have been less than satisfactory, and Hawk has only been voted to the Pro Bowl one time: in 2010. Hawk has played in both the 4-3 and 3-4.

All six of these Linebackers were selected in the top ten, with hopes that they could become the next Brian Urlacher, Lance Briggs, and Ray Lewis. Yet, very few of these players have lived up to the insane praise and comparisons that were given to them before the draft. Also, of interesting note, many of the aforementioned LB's played behind above average defensive lines, bolstering their statistics, and allowing greater opportunities to make plays. 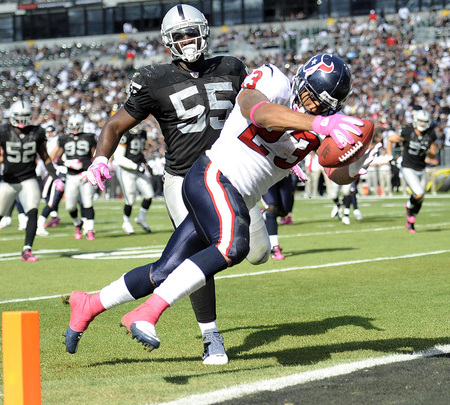 Moreover, The benefits of selecting a Linebacker with the ninth pick of the draft do not meet the costs. Currently, the Panthers' Starting Linebackers are James Anderson on the stronside, Jon Beason as the mike linebacker, and Thomas Davis holding up the weakside. Last season, both Davis and Beason were casualties to the injury bug, Beason suffering a torn achilles tendon, and Davis his third torn ACL. Much of the consternation over the Panthers' Linebackers is derived from Davis' injury riddled past, and many fans rightly question whether Thomas Davis' knees will be able to hold up through sixteen games. However, drafting Luke Kuechly in the top ten would likely be a luxury that the Panthers can not afford to exercise.

As we witnessed last season, the Panthers' Defense is full of holes left by injuries and a lack of talent. The Secondary is devoid of a second starter at Cornerback, as well as a competent Free Safety. More importantly, the Defensive Line is in tatters; unable to stop opposing teams from gaining big yards on the ground, and incapable of creating a consistent pass rush. The relative deprivation of the Defensive Line makes the Linebacker's job significantly tougher, as blockers are able to penetrate the Panthers' Front Seven. If the Panthers are able to upgrade the talent of the defensive line, the entire play of the defense will improve.

While Thomas Davis' injury history can not be ignored, a suitable back up can be found in the second round, or even the fourth round. Players like Zach Brown, Ronnell Lewis, Lavonte David, Mychal Kendricks, and Sean Spence, all are have the ability to make contributions as a reserve WLB in 2012. In addition, by committing to an OLB in a later round will allow the Panthers' Brass to target an impact player in the first round. Most teams drafting in the top ten are in need of an immediate impact player, and the Panthers are no exception. The Defensive mediocrity witnessed last season was conceived by in incompetence of the defensive line, and if the Panthers are able to improve the defensive line, they must. 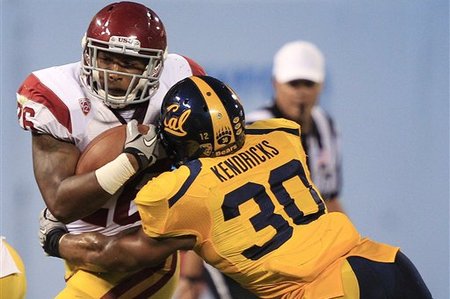 Furthermore, Bringing in Luke Kuechly allows for little impact in the 2012 Season. As a rookie, Kuechly would sit behind Thomas Davis, and even with heavy rotation, Kuechly's rookie stats would not surpass those of Rolando McClain or Aaron Curry during their rookie campaigns. While Kuechly may have a better prognosis for the future, sitting Thomas Davis, a veteran leader of the defense, in favor of Kuechly, is flat out venomous to the state of the Panthers' Locker Room.

Say the Panthers Defense plays 70 snaps per game, our top ten rookie draft pick, Kuechly would likely see the field for 25-30 snaps per game. Additionally, Kuechly, Beason, Anderson, and Davis would also be playing behind a less than stellar defensive line. Whereas, in drafting a Quinton Coples, Melvin Ingram, or Fletcher Cox, the Panthers will be repairing the defensive line with a quality player who will likely play 40-50 snaps per game, and make a larger contribution than a reserve WLB.

The quickest way to improve the overall play of a defense is to augment the pass rush. In doing so, the Panthers' Defensive Line will be able to force the opposing quarterback to release the ball quicker, masking the deficiencies of the secondary and coverage units. In addition, a prime example of such a turnaround would be the Broncos (Von Miller), the 49ers (Aldon Smith), and the Lions (Suh, Avril, Vanden Bosch). 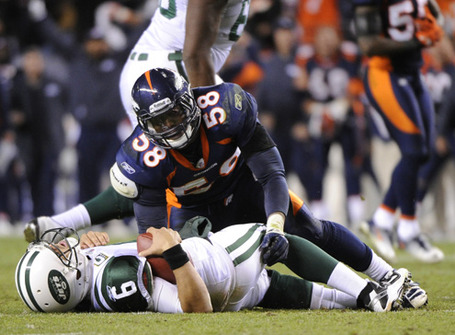 The drafting of Luke Kuechly, while popular at the moment, would not be beneficial to the longterm future of the organization. Don't mistake me, Luke Kuechly is a talented football player, and he will likely become a solid pro, but he does not warrant a top ten pick. Recent history, Cost-Benefit Analysis, and level of impact would behoove the Panthers' Front Office to passover Kuechly in favor of another prospect.