Last season the Panthers underwent their first full season under Ron Rivera and the new regime. And while the newly organized Air Coryell Offense instituted under Rob Chudzinski was a scintillating success, the metamorphose of the defense seeming went awry, and the Panthers stumbled out of the starting blocks, on their way to a 6-10 record. 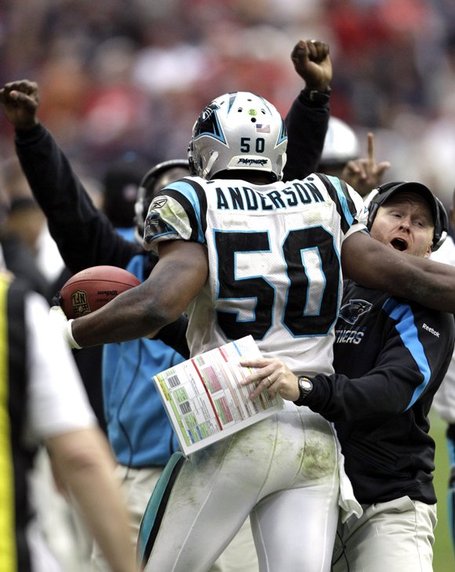 The Panthers defense is run by Sean McDermott, who will be on his second year on the job come September 2012. McDermott spent the bulk of his coaching career in Philadelphia, learning under legendary Defensive Coach Jim Johnson. Preferentially, McDermott runs a defense very similar to the Jim Johnson Defense, a Defense that thrives on overwhelming the opponent with zone blitzes, creating mismatches among the offensive line and the front seven. However, with the quantity of injuries sustained by the Panther Defense, it was near impossible for McDermott to run the Jim Johnson 4-3 last season. Yet, I believe we will see an increase of execution of the Jim Johnson 43 Defense next season. Moreover, through the course of this article, I'm going to outline the curriculum of the Jim Johnson Defense, as well as how the Panthers may execute it in the immediate future.

I thought it would be helpful to outline the basic football jargon and terminology of the defensive side of the ball, before delving into the crux of the Jim Johnson 43.

Strongside: The side of the ball with which the offense lines up a TE.

Weakside: The side of the ball without a TE.

The A Gap: The space between the Center and Guard.

The B Gap: The area between the Guard and the Tackle.

The C Gap: The space on the outside shoulder of the tackle.

The 1 Technique: Typically a NT who plays in the A Gap. Expected to hold up two blockers, and make other linemen's jobs easier

The 3 Technique: An Under Tackle who lines up in the B Gap. Burst and Penetration are key.

The 7 Technique: A DE who lines up in the C Gap, on the strongside; typically more powerful, and a good run stopper.

The 9 Technique: A DE who lines up on the weakside C Gap; typically a speed rusher, more of a pass rush specialist.

The 1 Gap Alignment: A Defensive Line arrangement in which each defensive lineman is responsible for his own gap (Most commonly seen in the 4-3).

Overview: The Jim Johnson 4-3, was pioneered by the late Jim Johnson (1942-2010), the illustrious Defensive Coordinator of the Philadelphia Eagles. The scheme bases it's basic premise off of pressuring the Quarterback through the pass game, as well as the run game, via mismatches created from zone blitzes. The Defensive Line will lineup in the traditional one gap alignment, as seen in a Base 4-3 Under arrangement.

The Defensive Line of the Jim Johnson 4-3 will lineup in the 1 gap alignment. There is typically a 1 Technique NT lined up in the A Gap on the Strongside, a 3 Technique UT lined up in the Weakside B Gap, along with a 7 Technique DE lined up on the Stronside C Gap, and a 9 Technique DE lined up in the Weakside C Gap. However, it is important to realize that the Defensive Arrangements will change over the course of the game, in order to maintain a rotation, as well as confuse the offensive line. The 9 Technique is responsible for creating a lot of pressure on the pocket, while containing the run on his side of the ball; similarly, the 7 Technique is supposed to draw a double team from the TE, while maintaing a lot of outside pressure while watching out for the run. The 1 Technique is supposed to draw a double team from the Center and Guard on the Strongside, either opening a hole for the 7 Technique to blitz threw, or a gap for the Mike Linebacker. And conclusively, the 3 Technique is charged with eating up blocks in the B Gap, as well as pushing the pocket, occasionally drawing pressure. Occasionally, a Defensive Lineman will be seen dropping back into coverage on a short route, making an emphasis on the speed and agility of a Defensive Lineman.

The Linebackers of a Jim Johnson 43 Defense need to be disciplined as well as fleet footed and agile. More often than not, the LB's will line up in a 4-3 Under alignment, with The Will LB lined up over the B Gap, or between the DE and DT on the Weakside, The Mike will line up over the A Gap on the opposite side of the 1 Technique, and the Sam will typically lineup on the line of scrimmage over the outside shoulder of the TE on the Strongside. The WLB's responsibility is maintaining Gap discipline, and covering for any missed gaps on the weak side; The Will will rarely blitz, and will cover many intermediate and short routes. The Mike Linebacker is primarily charged with playing zone coverage in the middle of the field, however, Mike also blitzes more often than any other LB, and is integral in a zone blitz. The Sam is charged with covering any runs towards the outside of his sector, and will often cover short routes in the flat; Sam will blitz on and off during the game depending the flow of action. The Defensive Coordinator will typically mix up the lineup of LB's in order to confuse the origin of a blitz, as well as the coverage being played. 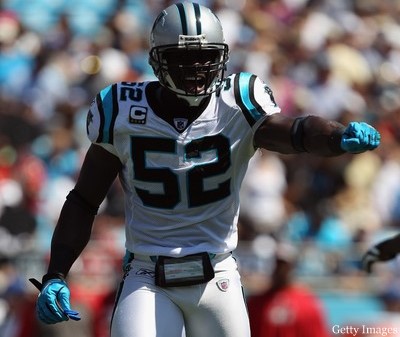 In a Jim Johnson 43 Defense relies on zone coverage to mask the deficiencies of the secondary as a whole, and to prevent the "big play" from the passing game. In a base Jim Johnson 43, the Secondary will be composed of two cornerbacks lined up 5-10 yards off of the line of scrimmage, unless they are jamming their marks at the line of scrimmage. The Free Safety will usually be lined up 10-12 yards off of the Line of Scrimmage, typically, off of the shoulder of the LB in front of him. The Strong Safety is lined 8-10 yards off of the ball, usually off of the shoulder of the Mike LB or intermittently the Sam LB. More often than not, the Secondary will play in a Cover 2 or Cover 4 zone, occasionally with the SS blitzing, or the FS engaging in a robber coverage. Good Tackling Safeties are needed, as well as quick corners with experience playing in a zone. Good ball skills are valued, as well as playmakers in run defense.

Tying it all together: The Jim Johnson 43 Defense relies primarily on zone reads, with Zone Blitzes executed by the Front Seven, as well as Zone Coverage in the Secondary, in order to make up for the deficiencies of the group, or to roll coverage onto a studly WR or TE. It all starts up front, with the lanes opened up by the DLine, creating gaps for the LB's to blitz through, creating pressure which forces the QB to chuck an inaccurate ball unto which the Secondary makes a play, hopefully forcing a turnover. The different units of the Defense must work in unison, or else the effectiveness of each unit will become moot. For example, if the Defensive Line is being blown off of the LOS, and can't do their job, it prohibits the blitzing LB's from completing their own tasks, allowing an opposing QB/RB to gash the defense as a whole. Furthermore, having subpar players executing a zone will create a weak link in the zone, or an open target for the opposing offense.

The Jim Johnson Defense can be very effective, dialing up pressure from seemingly nowhere, as well as coercing a QB into phantom blitzes that can confuse the opposition. An effective Jim Johnson 43 Defense can keep an opposing offensive coordinator guessing all day, playing into the hands of an amalgamate defensive unit. 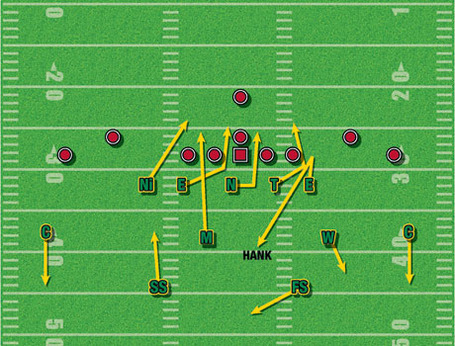 Formulating this expostition, I had visions of the Panthers Defense and how certain pieces could fit into Sean McDermott's scheme, however, That was a lot of writing, and it took me longer than I had originally planned for... So, I hope to pick things back up later in the week, with another look at the Jim Johnson 4-3 Defense, and specifically how it pertains to the Panthers and the immediate future. Stay tuned for Part II in next couple of days.