First off let me start by introducing myself; my name is Carrington Caul and I am a 21 year old future journalist. Now that we got that out of the way; as my first post on CSR will be a review of the 2011 season of S Charles Godfrey.

Even after missing a couple of games with injuries (9/25 Jacksonville, 12/24 Tampa Bay) Godfrey finished the season second on the team in tackles and also tying his career high he set in 2011 with 84. I thought Godfrey was often one of the bright spots of the defense that left me hoarse during most of the games that I watched this season.

With a 8 game home-away split this season Godfrey seemed to be more effective on the road than at home including his 1 sack, 1 forced fumble, and both interceptions. October was his best month defensively, collecting one of his two interceptions and finishing the month with 32 tackles. The most he had compared to any other month.

Godfrey’s numbers against the NFC South foes really stuck out. Godfrey collected NO sacks, forced fumbles, or INT’s. Going against Drew Brees, Matt Ryan, and Josh Freeman the defense has to cause enough pressure where they can force them into making mistakes which is easier said than done.

We've got more plus Godfrey's season highlights after the jump... 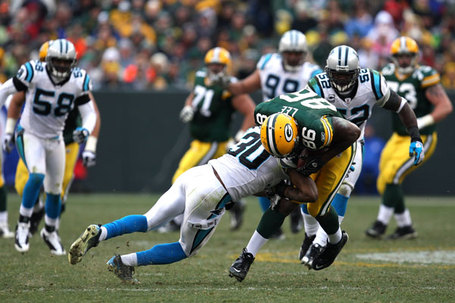 Nicknames: Charles Godfrey currently doesn’t have a nickname so if you want to create one for him leave it in the comments below.

Conclusion: Godfrey is a solid option as a starting safety. I think he’s underrated at his position, yet I don’t see him reaching 100 tackles or ever seeing more than 5 INT’s a season but he can be good in coverage and always seems to get to the ball and plays the run well. Hopefully new Secondary coach Wilks can come and rejuvenate the secondary and bring an aggressive play style. Panthers finished 24th in stopping the pass meaning they were better than eight teams and four of them were playoff teams while two of them were Super Bowl Champs New York Giants and Super Bowl losers New England Patriots