Breaking down the data: Panthers vs. Chargers

The Panthers played their game on Sunday, and were able to demolish San Diego.

Share All sharing options for: Breaking down the data: Panthers vs. Chargers

The Panters (sic) were able to put together a complete victory against the floundering San Diego Chargers, arguably winning every single phase of the game on Sunday.

Offensively, Carolina moved the ball down the field, and scored touchdowns, rather than field goals, operating under a steady balance, and a medley of personnel groupings. Even with a patchwork (even for our standards) offensive line, the Panthers controlled the flow of the game, and dominated the time of possession.

On Defense, the Panthers' front seven was able to stifle the Chargers' running attack, allowing the front four to aggressively pursue Phillip Rivers, to great success. With valued contributions from Mario Addison, Sione Fua, and Nate Chandler, the Panthers were able to keep their pass rush relatively fresh, helping to stave off any potential San Diego counterstrike.

For two weeks in a row now, the Panthers have been able to execute their game plan, and take their opponents out sync early on.

-The Panthers ran 75 plays on Offense.

And it could have been much, much, more.

-On first down, the Panthers passed the ball 3 times, and ran the ball 9 times.

Two of the three runs came in garbage time.

-Likely as a precaution to Cam's health, the Panthers only ran one read option play, for a gain of three yards.

-In direct correlation with the scoreboard, the Coaching Staff called 22 run plays from under center, for a total yield of 80 yards (3.64 ypc).

A solid game from the Offensive Line, who enabled us to run the ball with authority, picking up the tough yards that kept the momentum moving.

-A shining achievement, the Panthers were able to stay out of third down and long (3rd & 7+); 4 attempts (2 passes and 2 runs), with only one conversion, which came on a San Diego penalty.

Even better, three of the third-and-long's came in the second half, when the game was already in hand. 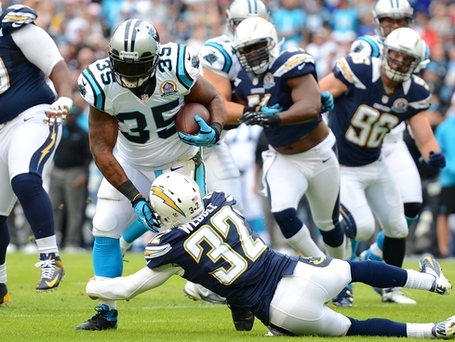 -The Defense only played 45 snaps.

In all, it was a fairly mundane day for the fronts and coverages, as San Diego was unable to string together drives.

-The Panthers played 7 snaps in man coverage and 38 snaps in zone coverage.

-Three snaps were spent in the 3-4 (all of which were covered by a zone).

Coming into this contest, the Panthers Coaching Staff was well aware of the potential weakness to be found on the Offensive Line. Led by veteran pass rusher Shaun Phillips, the Chargers have a solid front seven. Consequentially, the Offensive Coaching Staff thought to lean on DeAngelo Williams and Mike Tolbert, both on the ground and through the air. By running on first down (mostly successfully), the Panthers were able to establish favorable down and distance situations, allowing Coach Chudzinski some more freedom in play calling.

Impressively, the Panthers' blockers were able to seal the edges in the run game, allowing Williams and Tolbert to run off tackle with success. Pass blocking was a different story however, as a wounded Cam Newton saw consistent pressure from the San Diego pass rushers. Newton was spectacular at finding his targets and accepting when the play wasn't there.

Most of Cam's passing attempts were to the sidelines on comeback and out routes, while on a couple of occasions, the Panthers attacked the middle of the field with post routes to Steve Smith and Louis Murphy.

On Defense, the Panthers went with a familiar formula: load up the box on first down with seven-man fronts to stop the run, while dropping into nickel defense on passing downs. The success of the Panthers' pass rush, in addition to that of the Panthers' Offense enabled Coach McDermott to drop seven men into coverage and clog up Phillip Rivers' passing lanes.

The Staff was able to rotate rushers efficiently, without losing much, if any production. Against a severely overmatched Chargers' Offensive Line, Charles Johnson and Greg Hardy were able to rush the edges and outmaneuver the San Diego Tackles, utilizing a bevy of speed rushes, and conversion rushes to get to Rivers.

Looking to Next Week:

Oakland will bring a different challenge to the Panthers. The Raiders WR's aren't amazing, however, they do possess great straight line speed, something that our secondary lacks. Additionally, Darren McFadden and Mike Goodson present a potent rushing attack. If the Raiders get in a groove running the ball, it could definitely present problems for the Panthers Defense.

I'd expect to see a lot of Cover 2; once again look for the Defense to stack the box on first down. It will be crucial for the Panthers to keep the Raiders out of short yardage situations, forcing Carson Palmer to sit back and beat the Panthers DB's, as well as Charles Johnson, Greg Hardy, & Co.

Offensively, if Cam is fully healthy, I'd expect a return to the Read Option; Oakland isn't a very disciplined team, and the Read Option will certainly test that discipline. With the recent success running the ball, look for an increase in play action looks that will freeze the LB's/DB's for a brief second, possibly opening up deep strikes.