Breaking down the data: Panthers vs. Falcons

Share All sharing options for: Breaking down the data: Panthers vs. Falcons

With an incredible effort and game-planning, the Carolina Panthers were able to march into Atlanta and give the 3-0 Falcons a serious run for their money. The read option worked very well, and was responsible for some of the Panthers largest gains on Offense, while the Defensive Line was a force on Sunday, sacking Matt Ryan 7 times. Unlike previous weeks, the Panthers did not need to rely on blitzing to generate pressure on the quarterback.

The Panthers Defense had it's fair share of troubles. In run defense, the Panthers had trouble staying in their gaps, and seemingly could not make a tackle on first contact; consequentially, a potential 2 yard gain became an 8 yard gain. It wasn't much better for the pass defense, much like last week, Josh Norman was abused in coverage, this time by seasoned pro Roddy White. Additionally, Haruki Nakamura was once again slow in closing zones, not aiding the youngster Norman. On the bright side, Julio Jones was limited to one reception for 30 yards.

The Offense was largely able to move the ball consistently, and used a bevy of different formations and personnel packages to exploit the Falcons with. 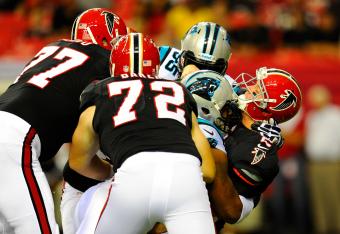 - The Offense was on the field for 63 plays.

This week we saw Ben Hartsock act as an extra blocker on the edge. It appears as if Chud would rather use Hartsock than Tolbert; I don't fault him.

This was the most we saw of 21 personnel this year, and much of these plays came from the I formation.

For the first time this year we saw Cam Newton, DeAngelo Williams, Jonathan Stewart, and Mike Tolbert all on the field at the same time. The formation appeared to be an inverted T formation, out of the shotgun. The plays were fairly successful, but not earth shattering. We may or may not see this formation going forward. Chud might utilize it further, or only keep the threat of it looming over opposing defensive coordinators.

- After achieving a first down, the Panthers called 5 passes and 13 runs.

This was a number I really liked. By running the ball on first down the Panthers were able to stay away from 3rd down and long. However, expect opponents to pick up on this stat and stack the box on first down.

Well, I'd say that is successful. 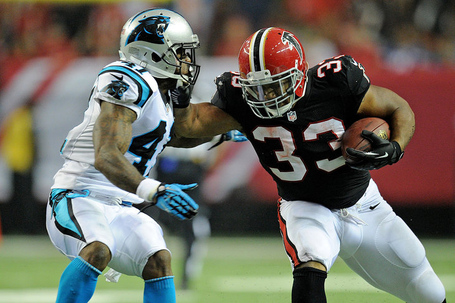 - The Defense was on the field for 66 downs.

- The Panthers played 45 snaps in zone coverage and 21 snaps in man coverage.

- Because of the nature of Sunday's game, the Defense primarily operated out of the nickel defense (4-2-5): 36 snaps (man coverage: 6 downs & zone coverage: 30 downs).

There really wasn't a big difference in the result of man vs. zone, as far as success was concerned.

-Despite putting up 7 sacks, the Panthers did not blitz very much outside of the first series.

I would have called a couple more blitzes, just to reinforce the threat of a possible blitz. However, there wasn't much need as the front four was generating excellent pressure.

To preface this, I'd like to say that I believe that the coaches called a great game, and had a very good game-plan.

Offensively, the play-calling was very balanced; Coach Chudzinski used the pass and run to facilitate drives. The read option was again implemented as a key component of this week's game-plan, and found success against a less athletic Falcons Defensive Line. By running the ball out of the one-back shot gun formation (11 personnel), the Panthers are truly able to mask their play call. The Offensive Coaching Staff really threw out the kitchen sink in regards to this game. We saw just about every creative formation or play that we imagined this past offseason; Armanti Edwards threw an 8 route to Steve Smith, DeAngelo Williams operated the wildcat, we saw a return of the Buckeye Pistol, and even the Inverted T formation. It is highly doubtful that we see all of these wrinkles again at one time. It is also unlikely that we see some of these personnel groupings again. Chud's primary aim was to catch Atlanta off-guard, and for the most part, he did. However, an ancillary goal may be to worry upcoming opponents.

Cam Newton played a much better game: He moved around well in the pocket, hit open receivers, and even checked the ball down when appropriate. As usual, most of the routes Cam hit on were 5/6 routes (curls and comebacks) and 3/4 routes (out and crossing routes) to the sideline. Of note, Brandon Lafell did not make a single reception against the Atlanta Secondary.

Defensively, the Panthers were forced to operate out of the nickel defense for much of the game, due to Atlanta's use of 11 and 10 personnel. However, rather than relying on Haruki Nakamura and Charles Godfrey to play centerfield in order to counteract the Atlanta deep threat, the Safeties played closer to the action and were able to slow down Tony Gonzalez and the short passing game. Consequentially, the Panthers got beat deep on a couple of occasions. Additionally, the Defensive Coaching Staff wanted to set the tone early with a couple of blitzes on the first series, and with resounding success they did. Afterwards, the Panthers front four was able to achieve immense pressure, more pressure than we've seen in years. Charles Johnson, Greg Hardy, Dwan Edwards, and rookie Frank Alexander all shined in the pass rush, contributing the lack of blitzes we saw in the second half. However, I'll wait until they do it with consistency before proclaiming our pass rush solved; coming into 2012, Atlanta's O-Line was a question mark for the Falcons.

In case it hasn't been noted yet, Josh Norman and Haruki Nakamura both struggled in coverage. Norman was schooled by Roddy White, the veteran's route running and speed causing Norman to struggle in zone, while in man coverage, White was able to gain an inside step, and compromise the integrity of the coverage. On TV it was difficult to see Nakamura's exact problem, but he was consistently slow in helping out Norman, even though it was apparent that Matt Ryan was picking on him.

Looking Forward to Next Week:

Seattle has a fairly aggressive, and athletic pass rush, it will be a challenge for the Panthers O-Line, especially so in the read option, with Chris Clemons and Bruce Irvin rushing the pocket. Seattle's Defense is filled with talent, the aforementioned Chris Clemons and Bruce Irvin are quality pass rushers, while Red Bryant is a boulder on the defensive line. The Seahawks also sent three members of their secondary to the pro bowl last season: Kam Chancellor, Earl Thomas, and Brandon Browner, with many analysts feeling Richard Sherman worthy as well.

I expect another big game for Greg Olsen, as he'll matchup with Seattle's LB's, and depending on how the Seattle Defense reacts to the running game, some deep shots as well.

Defensively, we will probably see more zone coverage, but with perhaps more Cover 1 this week. I also expect there will be a return to the base defense, with 7 or 8 men in the box, as Marshawn Lynch is Seattle's primary offensive weapon. In addition, I think that we will see sparse blitzing to keep Russell Wilson on his toes, with a reliance on the front four to generate pressure like last Sunday, however, we won't see as many conversion or bull rushes, as Wilson's mobility will leave the Panthers susceptible to scrambles, instead look for containment rushes such as speed/edge moves.