In 1992 Gatorade ran the all too famous "Be like Mike" ad. On Wednesday night in Charlotte the stars of the Miami Heat, Dwayne Wade and LeBron James decided they'd rather be like Cam, who was again sitting with Charlotte Bobcats' owner Michael Jordan.

In a game surprisingly dominated by Charlotte for much of the game the Heat inevitably fought back, and with mere seconds remaining Wade hit what resulted in being the game winning shot. Instead of taunting the Bobcats, or cheering with his teammates he turned to where Newton was sitting, and well... a picture says a thousand words 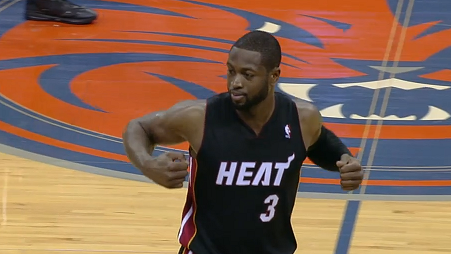 Yes, that's Wade mocking Cam's now signature 'Superman' celebration. It doesn't show it in this photo, but LeBron James was at Wade's wing doing it too. Now Wade and the Heat are playing it off as 'good fun', as one would expect, and really I don't care a whole bunch. I kind of think it's pathetic to mimic someone from a different sport, but hey I know it's not the NBA in 1990 anymore; the legendary caliber of trash talking has denigrated into making fun of cancer patients in the case of Kevin Garnett, or in Wade's case mimicking Newton. Some view this as a badge of honor, after all, how long has it been since someone like Newton got this kind of transcendent national attention?

So I thought I'd turn to you, the CSR community to get your take. Fair, or foul? Was Wade's mimicking all in good fun, or something else.