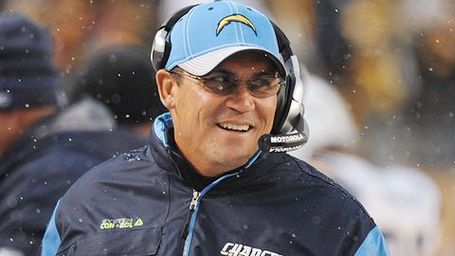 UPDATE: The deal has been reached... finally! According to the Charlotte Observer the Carolina Panthers and Ron Rivera have agreed to terms, but they are undisclosed. No word at this time about when a press conference will be held.

We have been discussing the merits of hiring Rivera today, but we'll look again at the new Panthers head coach...

A second round pick in the 1984 draft Ron Rivera played linebacker for the Chicago Bears for nine seasons including their Superbowl XX win over the New England Patriots. When he retired in 1992 Rivera took a brief hiatus before re-entering the league in 1997 as a 'Defensive quality coach' for the aforementioned Bears.

Two years later Rivera worked under the legendary Jim Johnson in Philadelphia where he was the Eagles linebackers coach for four years, it was then Rivera was promoted again, this time returning to Chicago as defensive coordinator.

It's his time in Chicago at this period that is often misunderstood. While yes, Rivera was only in Chicago for three seasons the common thread is that he never should have been let go. He was a victim of Lovie Smith entering the organization and wanting 'his guys'. From the time Rivera left in 2006 to Chicago's first season without him the Bears free fell from 5th in the NFL in defense under Rivera to 28th in 2007.

It was at this time he went to San Diego first working with the Chargers as a linebackers coach in 2007. For the 2007 season the Chargers 3-4 under Wade Phillips were 14th in the NFL in 2007.

When Phillips left for Dallas to become their head coach it was Rivera's turn to run the show. 2008 was a tough year marred with injuries and transition, but despite the poor year defensively that left the Chargers ranked 25th he turned them around getting them back to 16th in 2009 and finally 1st in the NFL in 2010.

Ron Rivera's brand of defense does not necessarily dictate a certain scheme, as he has worked both under a 4-3 and 3-4 front. He's known as a 'players coach' who relates very well to defensive staffs and has run extremely aggressive systems known for exotic blitz packages and great run defense.

If I may op-ed for a moment: Carolina Panthers fans should be extremely optimistic with this hiring. From where I sit the Panthers have needed a man like Rivera for a while now, and its sure to make Monday mornings a little more interesting.

Provided they agree on a contract, which doesn't seem to be a problem the Carolina Panthers Rivera will become the fourth HC in franchise history.