Is Panthers #1 Preseason Defense a Mirage?

Share All sharing options for: Is Panthers #1 Preseason Defense a Mirage?

After three preseason games the Carolina Panthers are a surprise sitting as the top defense, statistically speaking that is. There are plenty of ways to explain the ranking away as meaningless and I would agree with most of it. There are many variables at play in the preseason so its easy to find exceptions to any conclusions you might draw.Per NFL.com here's the numbers:

It's when you draw in the subjective evaluations that I think it makes a case for the fact this ranking is no fluke. I'm not saying the Panthers defense will be #1 once the regular season rolls around. Remember this defense finished 2009 ranked #8 overall. Though they purged five starters (Kemo, Lewis, Harris, Diggs, Pep) three of them were hardly considered speedsters (Kemo, Lewis, Diggs) for their positions. Harris was average at best speed-wise. Which boils it down to the reason nobody outside Carolina thinks this defense will improve: the loss of DE Julius Peppers. Yet I say overlook this defense fantasy-wise at your own risk.

First, this defense is fast and speed doesn't just disappear come the regular season. Meeks cover 2 system focuses on stopping the big play (only one this preseason) and uses speed to contain the underneath plays. This defense loves the 3rd and long which they seem to be forcing quite a bit. In three games they have 18 sacks showing they have already adjusted to life without Peppers. In the most recent game we saw the Panthers blitzing LBs fairly regularly...more after the jump...

A second reason is the Panthers have upgraded a defensive secondary as one of the top units in the league. Chris Gamble is playing like shut down corner and Jon Beason looks even better at WLB. At SS it seems unlikely but though Harris leadership and smarts will be missed Charles Godfrey is now excelling in run support. Also, the Panthers 6 DB set that was so effective at the end of last season is back in spite of the change in key personnel. Where Dante Wesley played the 'wolf' position Panthers FA acquisition CB Marcus Hudson seems to have found a similar niche:

After playing fairly vanilla defensive schemes in the first two games, the Panthers experimented last year with a pass-defense alignment which included three linemen, two linebackers and six defensive backs, but with defensive back Marcus Hudson as a de facto linebacker. They started showing it last season against pass-happy Arizona, with Dante Wesley in the close-support safety role, but expanded its use through the rest of the season, with the career special teamer logging over 100 defensive snaps.

When Wesley left in free agency, it was unclear if they were going to be able to use it again. But Hudson, similar in size and skill to Wesley, has resuscitated the role. 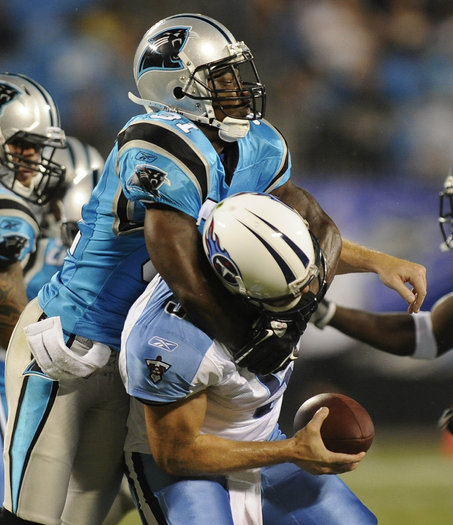 Third the Panthers seem to have plenty of talent at DE which somewhat of a surprise to even the most loyal Panther fan. We knew Tyler Brayton would be steady in the run defense but beyond that we were hoping for break out years from Charles Johnson and Everette Brown. Well both players have shown they ready for such a break out. Yet it gets even better. Rookie DE Greg Hardy also looks like the real deal, something we didn't expect from a 6th round pick. Consequently the Panthers suddenly find themselves deep at DE in spite of Peppers supposed 'loss'.
Let's now address the devils advocate view of this post. For those not familiar with the Panthers three games to date here's the offenses that have been shut down:
1 - Ravens (without Ray Rice though)
2 - Jets (#1 rushing offense last year)
3 - Titans (Held CJ to 10 yds on 8 carries)
I would agree the three QB's aren't exactly top passers in the league but all three sport pretty good receiver corps.Also, on average the starters only played on average 7 of the 12 quarters of football played. Plenty of key players were missing and teams rarely game plan. I agree, plenty of variables to explain away a poor showing for those teams not happy with how their defense is playing.

Yet I agree this defense is not without additional liabilities, mainly a poor Panther offense to date. For as good as the defense has been the offense has been the opposite. If the offense can't hold onto the ball and forces the defense on the field the majority of the game then they will wear down.
So whether you think the #1 ranking means nothing or you think it indicates good things to come there is no denying the Panther defense has looked good doing it. Whether it carries over into the regular season opener against the Giants is still debatable I'm thinking by the 4th game of the season there will be a lot more believers around the league.