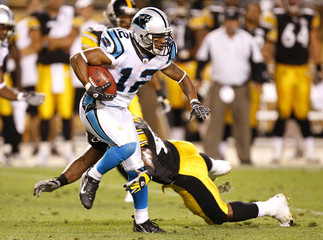 I usually hate Thursday night games since it gives teams less time to prepare and players less time to recover but I’ve been thinking of some of its advantages lately. It means that we can have a Sunday to sleep in or watch other games. It also means that it wont be on Fox so we wont be stuck listening to Ron Pitts, Dick Stockton or Tory Holt this week, which is a plus. Not that the NFL Network’s wonderful crew of Bob Papa, Joe Thiesmann and Matt Millen are an improvement. Anyway, let’s get to previewing the Panthers showdown with the Steelers tomorrow.

This is going to be a shortened version to my usual preview because it’s week 16 and the Panthers are 2-12 while the Steelers are one of the best teams in the AFC and favored to win by two touchdowns. On top of that, both teams are coming off a shortened week and the list of Panthers who didn’t participate in practice this week now includes Tyler Brayton, Tony Fiammetta, Mike Goodson and Captain Munnerlyn. All very important players and three starters. Meanwhile, the Steelers look completely healthy with the exception of defensive end Aaron Smith and star safety Troy Polamalu. I’m thinking the Steelers will let Polamalu sit out this week if only for the fact that they’ve clinched a playoff spot and will want to prevent him from injuring himself further. It should be noted that Pittsburgh is 5-7 in games without him but I don’t think it should play that much of a factor this week given how the Panthers have been playing.

You can follow the Steelers and this contributing blogger over at Behind the Steel Curtain, SBN's Steelers blog.

Anyway, like I said this will be a shortened version of my preview so I’m going to briefly breakdown the offensive and defensive matchups for both teams. We’ve got two teams who love to run the ball but both of their offenses are struggling. The Steelers have only scored 4 offensive touchdowns in their last four games and we all know about the Panthers struggles on offense. Thus, I think we’re going to have a low scoring game and who wins will depend on who can make the most plays through the air, thus giving advantage to the Steelers.

Jimmy Clausen took a step forward last week against Arizona but that was against a very poor Cardinals pass defense. The Steelers don’t exactly have a great pass defense either and both of their corners are prone to get burned in man coverage. When Polamalu is playing, that changes everything because he makes up for their corners flaws with his ability to create turnovers and nail receivers going over the middle. It’s looking like Troy wont play in this game and taking his place at strong safety is Will Allen, who isn’t nearly as good. William Gay and Byrant McFadden will likely be double teaming Steve Smith which could free up space for other receivers David Gettis and Brandon LaFell but keep in mind, the Steelers have another capable safety in Ryan Clark who can force turnovers if Clausen isn’t careful.

There’s also the issue of whether or not Clausen will be able to have time to look down-field for receivers. The offensive line hasn’t played well and the Steelers are a team who loves to blitz and can dominate teams by this method. Clausen can expect to see Ziggy Hood, James Harrison, James Farrior and Lamarr Woodley among others in his face all game. The Steelers have made life hell for opposing QBs by blitzing like this and they will be licking their chops to get to a struggling rookie in Clausen tomorrow night. However, good QB’s have been able to take advantage of Pittsburgh’s secondary and beat them over the top. I’m not confident in Clausen’s ability to do that but QBs like Colt McCoy and Ryan Fitzpatrick had good outings against Pittsburgh this year so we’ll see what happens.

This matchup doesn’t necessarily work in our favor either. Carolina thrives on running the football and the Steelers have the best rushing defense in the league (allow only an average of 63.4 yards per game) but Mike Goodson was able to find holes in Baltimore’s running defense so anything can happen. The Steelers defense is a lot more stout than the Ravens, though. Running backs like Chris Johnson, Ray Rice and Peyton Hillis were all shut down against Pittsburgh so Jonathan Stewart will have his work cut out for him when it comes to finding holes in this defense. I expect Pittsburgh to stack the box with 7-8 guys and dare the Panthers to beat them through the air, which could be hard if we don’t establish some kind of running game. Add in a weakened offensive line going up against one of the top rushing defenses, and it’s hard to get confident about our chances but like I said, anything can happen.

There’s not much to say about the Steelers running game other than it’s centered around Rashard Mendenhall and he gets at least 20 touches a game. The Panthers rushing defense has been gashed by other teams this year so this is another matchup which doesn’t work in their favor but they did a nice job of halting Tim Hightower last week so that’s some progress. Stopping Mendenhall is going to be a much more difficult task since he’s a lot more powerful and can burst through defenders easily. Hopefully this won’t be a repeat of what Peyton Hillis did to us about a month ago. I’m sure Charles Godfrey remembers that well. Hopefully the rest of the defense does too because I’m expecting Carolina to do what the Steelers are planning to do to stop Stewart; crowd the box and try to bring down Mendenhall. Our linebacking corps better be ready. Mewelde Moore and Issac Redman are used sporadically, as well but they’ve mainly been more effective on screen passes, which we should also be ready for.

The news of Captain Munnerlyn not practicing has me worried since he’s been very good filling in for Chris Gamble and we need all the help we can get covering a deep threat like Mike Wallace. The good news is that Gamble is apparently practicing this week and could play so that’s one less thing we have to worry about. Richard Marshall will have his work cut out for him covering Hines Ward, who is mainly dangerous over the middle and on short routes, which have killed us this year. Other threats in the Steelers receiving corps are Emmanuel Sanders, who is good but still makes a lot of rookie mistakes. I still think he has a chance for a big game with the possibility of him being covered by Robert McClain. Tight end Heath Miller also could be returning this week and he is one of the best in the league, so that’s just one other thing a defense who has struggled covering tight ends has to worry about.

Pittsburgh’s offense has a chance for a big game here to get themselves out of a slump because just about everything here is a favorable matchup for them. Carolina can change things by doing one thing; get pressure on Ben Roethlisberger. Aside from their corners, the Achilles heel of the Steelers is their offensive line and while the Panthers pass rush hasn’t been great this year, it’s been steadily improving. The problem here is that with weak defensive tackles along with Brayton and Everette Brown being out, Charles Johnson and Greg Hardy are going to have to do most of the work themselves with getting pressure on Big Ben. It doesn’t help that Roethlisberger is one of the better QB’s in the league at keeping plays alive and giving his receivers time to get open downfield. Remember how Josh Freeman destroyed us with his scrambling? Imagine that times 5 with Big Ben. Bringing him down and forcing him to make bad passes could be what gives the Panthers a chance in this game since Ben’s not one to take a sack.

- Establishing a pass rush and getting to Roethlisberger. As I mentioned earlier, Big Ben doesn’t take a lot of sacks and will try to force throws under pressure. The Steelers offensive line hasn’t been great the past few seasons so it’s very possible Carolina can get to him even with the injuries we have.

- Making plays in the passing game. This won’t be that easy since Clausen is still a work in progress but the only way to beat Pittsburgh’s defense is by taking advantage of their two corners and burning them deep. Whether or not Clausen can do that or will have enough time to throw the ball remains to be seen, which leads me to my next point.

- Pass protection. The Steelers are going to be dialing up a lot of blitzes and will likely be in Clausen’s face all game since Carolina’s offensive line hasn’t done well at pass blocking. We may need to keep five or six guys back just to pick up all of the blitzes the Steelers will send in our direction. If we can give Clausen time to make plays then we could have a chance at pulling an upset.

- Stop Rashard Mendenhall. He is going to get a lot of touches in this game and the run defense really needs to come up big. They haven’t done a good job at stopping anyone this year so this will be a tough task.