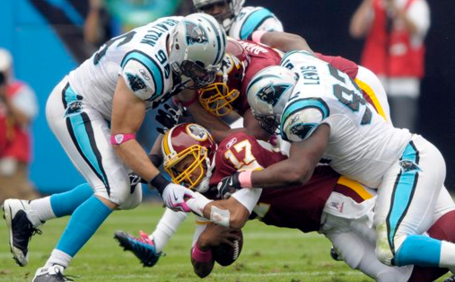 Hey guys!  While we're all sitting around watching the Playoffs and, unfortunately, don't have any Panther playin' going on, I figured I'd start a little mini-series of webisodes where I run down my favorite moments of our 2009 season.  Maybe this discussion can satisfy our hunger for Panther content, at least a little bit ;-)

So, in no particular order of importance, I give you my first favorite moment of my/our 2009 season...

My Return from Injury Against Washington

So there I was... all excited and gung-ho about entering the '09 season with a big splash --- and then injury struck.  If that's not a momentum killer for an athlete, then I don't know what is.

It was the Wednesday before our first regular season game when the injury hit me.  I slipped, fell, and thought I had just earned myself a minor sprain -- I was certain I'd be back to practice the next day (or so I thought).  However, low and behold, what I believed to be an insignificant sprain turned out to be much more serious, and I ended up missing the first three games of the season -- unfortunately, all of them were losses.  Looking back, I wonder if those losses could have been turned into wins had I been on the field (I don't know? ...That's a possiblity ...RIGHT!?! HA!).

So, FINALLY, after weeks of rehab, I was able to make my '09 debut against Washington, here in Charlotte.  The energy of the game and the crowd was ELECTRIC, and we won the game - if I remember correctly, the score was 20-17.

While my patience towards my rehab paid off, because I had made so much progress in healing my injury, I still had to play the game against the Redskins in a knee brace, and those are not all that comfortable.  But, you know, feeling physically uncomfortable is a part of playing of football.  Each season we only have so many games to play, so sometimes you gotta get out there and deal with your aches and pains so that the team can put their best product on the field.  Seriously, health wise, I don't think ANYONE in the NFL plays at 100%.  If there are some who do, there ain't many of'em, because most players always have something wrong with them.  And while that "something" may not be major, it's still annoying.  As for myself, during the game against Washington, I was probably about 85% healed.

Getting back on the field against Washington after my injury really was a big deal for me, because preparing myself to return to action was such a tough process.  Actually, because I was so anxious to play during my rehab, there was moment when I thought I'd be able to play week three's game (a Monday night game against Dallas), but I simply wasn't ready, yet.  After that week against the Cowboys, my anticipation to play only strengthened, because the following week was a bye.  So, instead of doing what I usually do when we're off - having some fun - I had to spend those days working out my injury. ...BOOOOO.

So yeah... getting back on the field after weeks of recuperation was definitely one my favorite moments of the season, because bouncing back from the fall of an injury is something worth being proud of.  And the fact that we brought home a win in my return -- well -- that made my 2009 debut even sweeter.