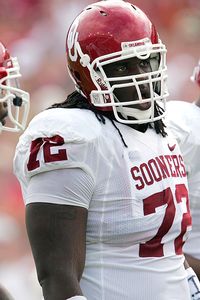 After a brief lull in rookie contract signings the Panthers closed a deal with 5th round pick G Duke Robinson.

The Carolina Panthers have struck a four-year deal with rookie offensive guard Duke Robinson that included a $171,590 signing bonus, according to a league source.

The fifth-round draft pick's deal has a maximum value of $2.663 million if a fourth-year escalator clause is triggered.

The 6'5, 330-pound former University of Oklahoma standout is the great nephew of singer Smokey Robinson.

Robinson was projected to be drafted a lot higher but slid after concerns about his weight and conditioning. He's a 6'5" 330 lb behemoth that could be the gem of this Panther draft if he can dispel the concerns. He should plug quite nicely into the RG spot in a season or two.

Hat tip to Dave Jinxer for breaking the news