Everette Brown can provide an immediate impact to the Panthers defensive line. He has excellent pass rushing skills and is likely to quickly bypass both Charles Johnson and Tyler Brayton as the starter at left defensive end. He has a quick release off the edge, a good arsenal of moves, and stays quite low to the ground. Some have compared him to Dwight Freeney from Indianapolis in this respect. He was projected as a first round selection and some had as high as a top ten pick earlier this year.

In addition, his character is a perfect fit for the Panthers as he has been a leader for he Seminoles in his volunteer efforts. He also hails from nearby Wilson, NC, not too far from Peppers hometown of Bailey, NC.

Brown's size is the biggest concern. Many scouting reports placed him as a hybrid (tweener) DE/OLB in a 3-4 defense. He's been compared to DeMarcus Ware, which isn't a bad thing, but Ware does play in a 3-4. Because he's a little smaller his rushing defense could be suspect, especially when facing a hefty offensive lineman. He could stand to add a few pounds to his frame. 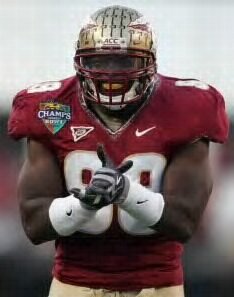 Just the though of having Julius Peppers and Everette Brown on the defensive line gives me a great big smile. While there is uncertainty with Peppers future, I have no doubt I want them to play at least one year together. On the other hand if Peppers isn't around this year, Brown should be able to step in a provide an adequate replacement.

With the addition of Ron Meeks as the Panthers defensive coordinator, this pick fits perfectly in his style of defensive player.