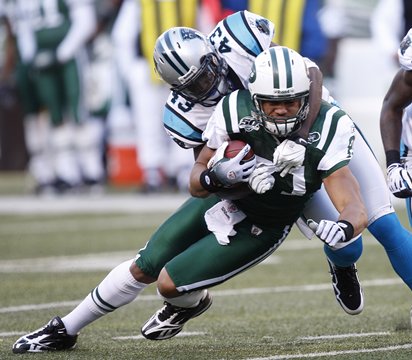 UGH... Tough loss, man... tough loss.  I don't even know where to begin with this post about what happened yesterday.  It's SO FRUSTRATING to lose a game we should've won.  I just can't understand why we're 4-7, right now.  I know it's not because of a lack of effort or a lack of fight, I just think we gotta play a lot smarter.


Defensively, I truly feel like we played a pretty decent game.  We held them to 17 points and created 3 turnovers, and to do that makes us feel like we're making progress in accomplishing some of our goals we've been working on with our D.  The only thing I wish we could have done differently, was when the game was in the red zone, the Jets were 1 for 2.  If we could have held them on one of those opportunities, we might have given ourselves a better chance to win.

So yeah... as far as the playoffs go, our window of opportunity is closing quickly.  But I'm one of those optimists - ya know, a glass half-full kinda guy - who feels that we can still lock down a 9-7 record.  Sure, if I wanna get all negative and stuff, I could look at the reality of the situation and recognize that we could, quite possibly, screw around and end the season at 4-12.  But, obviously, that's a route we're gonna avoid at all costs.

I know all of you are asking yourselves the same question we're asking to ourselves... How could this Panther team who, last year, secured a 12-4 record, come along this season and be sitting 4-7 at the end of November?

The truth is that none of us could foresee our year panning out like this, just like I'm sure you guys didn't see it coming, either.  But, for whatever reason, these are the cards we've been dealt, and we can't send them back and ask for a stronger set.  We gotta play this hand and try to win no matter what, even though the odds may seem to be stacked against us.

This is gonna be tough.  We're playing for pride now, and if our guys have any heart at all (and WE DO), we're gonna step up and do something about the circumstances we've created for ourselves.  There's no doubt in my mind that this team is still fighting, because no one around here has given up on our season - not even a little bit.  We're gonna get back to work, prepare for Tampa Bay (a team who's gotten a lot better since the first time we played them), and execute a winning style of football, so we can walk off the field with a victory.