Peppers Time in Carolina May Be Over

Share All sharing options for: Peppers Time in Carolina May Be Over

I've always thought the chance of DE Julius Peppers ever leaving the Carolina Panthers was nil but now I'm not so sure. Peppers refuses to acknowledge that he wants to stay and the Panther defense lacked teeth in the pass-rushing game in spite of his career high 14.5 sacks. Of course it could all be contract posturing on Peppers part, making sure the Panthers know they will have to let go of serious coin for him. To franchise him would cost the Panthers around $17M next season. As hard as it would be to see him go I have to admit the team might be better served going in another direction:

After 10 weeks, the Panthers ranked second in the league on defense in points allowed and eighth in total yards allowed. By the end of the season those numbers has swollen to 12th in points and 18th in yards.

For the most part, it was the pass defense that failed the Panthers.

Carolina didn’t get much pass rush despite Peppers’ presence.

And now, there’s a good chance they may lose Peppers, who doesn’t sound like a guy who wants to be back in Carolina. Peppers is slated to become an unrestricted free agent, and there’s plenty of speculation the Panthers will put the franchise tag on him and trade the four-time Pro Bowl defensive end.

Last year the Vikings gave up a first rounder and two 3rd rounders for DE Jared Allen. I imagine Pep would fetch that and possibly more. At 28 years old his value will never be higher than it is right now. With 3 additional picks let say in the first three rounds the Panthers could get a DE plus fill a couple other needs, maybe at QB and CB.

Speaking of the CB position, the same article I linked above has a semi-surprising note:

They like (CJ) Wilson and view him as a star in the making.

That's interesting. If Lucas is cut and CB Richard Marshall moves to his spot Wilson may be the nickle corner. That may allow the Panthers to use a draft pick or free agent money in other areas.

In yesterday's post on free agent decisions I didn't mention anything about back-ups so I'll cover that now:

CB Ken Lucas: He got burned repeatedly this season and seemed to lack confidence after Chris Gamble got a contract extension. With Lukas set to count more than $9 million next season against the salary cap, look for the Panthers to cut ties with him. "I can’t answer that question," Lucas replied when asked if he’d be back next year. "I’m not part of the personnel department. I just play. If they call my name, then I’ll be back, but if not, I enjoyed my time here. That’s how I look at it. You can’t stress about stuff like that you can’t control."

LB Landon Johnson: A hip injury (although not serious) in the playoffs should only expedite Johnson’s release. At $10 million over three seasons, he was a big swing-and-miss this past offseason. The Panthers would be stupid not to free up some cap room by cutting him with two years left on his deal. Besides, Dan Connor should be back next year.

LB Adam Seward: Nobody wants out of Carolina more than Seward, who is frustrated over being deactivated for most of the second half of the season by Fox. He wanted to sign with New England last year and in a few weeks he’ll be free to go where he wants as an unrestricted free agent.

OG Geoff Hangartner: Another unrestricted free agent, he played in a lot of games for Carolina and it wouldn’t surprise me if he bolts for a place where he can start if the money is right. Somebody’s going to offer him starter’s money. Keydrick Vincent said he will be fine to go in minicamp, so Hangartner’s chances of starting next year are nil with the starting five basically set in stone, providing Jordan Gross re-signs.

WR D.J. Hackett: Hackett contributed little for the Panthers this season with 13 catches for 181 yards and no touchdowns. He was deactivated for the playoff game. Remember when he was supposed to be the starter? That never worked out so well, did it? Look for him to get cut with one year left on his deal.

DT Darwin Walker: He’s an unrestricted free agent and his career might be over with anyway. Walker injured his neck in a car accident this year and was never the same after that. Like Hackett, he was inactive for the playoff game. Look for Carolina to add more help at defensive tackle in free agency.

LB James Anderson: It’s hard to imagine Anderson, a former third-round draft pick, coming back next year unless he wants to do so as a low-budget special teams guy.

The only one in this group I would hate see go is OL Geoff Hangartner. His versatility is very valuable and was a big help early in the season when the Panthers battled injuries on the offensive line. The Panthers would have to find a back-up Center from somewhere.

Otherwise I think the Panthers have the depth or can find the depth to replace the other players. 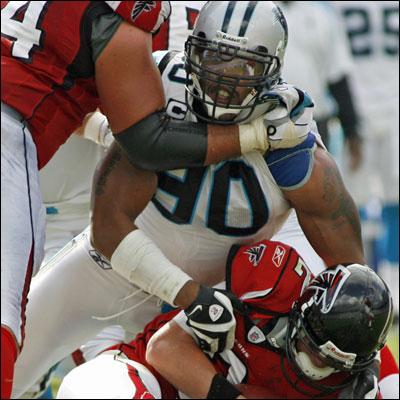 Could Julius Peppers be wearing a new uni next season?