Share All sharing options for: Get Pumped Panther Fans, Its Falcons Week!

Okay, when you think of the NFL's great rivalries I'm sure Panthers-Falcons doesn't jump to the forefront of your mind. If you're a fan of either of these teams then it should. The Panthers have only been around for 13 seasons but they have played the Falcons (and Saints) twice a year from the start. The Falcons lead the all time series 16-10 including a 7-5 record on the Panthers home turf. Even more surprising is the road team has won the last five meetings between the two.

Here's the Panthers official News Release for the game and of course you can always find the best head-to-head comparison at NFL.com team pages.

Little King will be providing an individual match-up analysis for this game later but I have some other high level musings to discuss about this key division match-up:

DE John Abraham sizes up his next meal...err sack 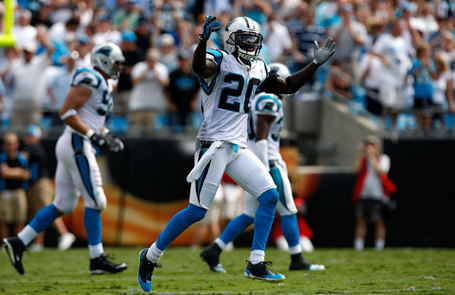 CB Chris Gamble shows how big his heart is!

So let's hear from you Panther fans. Is this a true ‘rivalry' in the mold of other NFL rivalries?